An old-style distillery on Islay 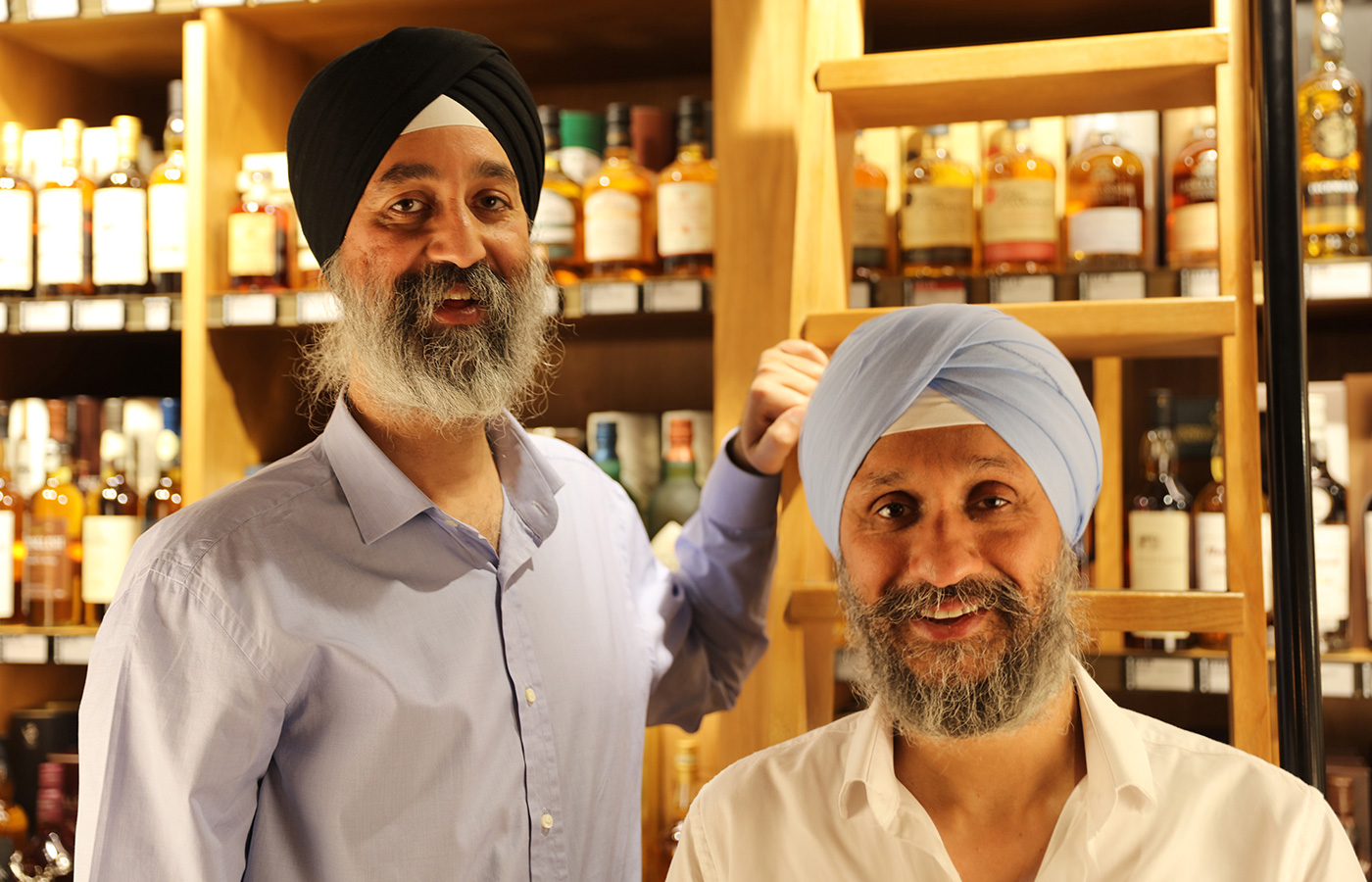 “It was never my intention to open my own distillery, but I was certain of one thing: if I ever did open one, it would be on Islay."

When Luca Gargano offered me the opportunity to interview Sukhinder Singh to talk about his plans for his new distillery - the eleventh on the isle of Islay - I didn't expect to find myself discussing how to bring fresh sugar cane to Islay.

But let's start from the beginning. From the post-war period to the present day, the reputation of peat whisky has been on a real rollercoaster ride. It was very successful in the 1960s and 1970s as a contributor to blends, rather than for direct bottling; then, the 1980s crisis hit very hard what is now - as was back then - considered a very remote community. The shift that occurred in the 1990s, when interest in single malts started rising dramatically, did not have an immediate impact on the island. In addition, the smoother whisky produced in Speyside on the mainland bit off more market share from this extreme, increasingly subsiding style. Indeed, in 2005 - which is practically contemporary history - the industry giant Pernod Ricard, forced by anti-trust authorities to get rid of a few distilleries, decided to sell Laphroaig, the only peat distillery in its portfolio and a distinctive signature malt for its bestseller Ballantine's. 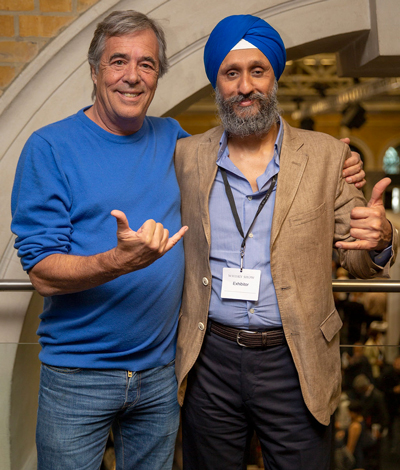 Enthusiasts eagerly picked up on what big companies couldn’t understand. That’s how myth of peat was born, and the resulting unstoppable tourist flow of malt maniacs to the island transformed its very landscape in the span of just a few years. It was only a short time before someone started to believe and invest in the island, and at the end of that same year - in December 2005 - the first new distillery was opened on Islay after 124 years of shutdowns. Kilchoman officially became the eighth distillery on the island and, in the midst of an impressive line-up of whisky giants (Bowmore, Caol Ila, Lafavulin, Laphroaig), it clearly pointed to the only viable future: a farm distillery using barley produced locally in its own fields.

This inspired the Singh brothers to embark on their own adventure as distillers. In 1999 they founded the London-based retailer Whisky Exchange, now a European and global touchstone of spirit trading and collecting. Then, four years ago, for the first time they came back empty-handed from a trip to Scotland: they found no interesting casks to buy. This instilled in them a desire to set up their own distillery, a project that Sukhinder confessed he had never dreamt about. Their business as traders was booming and did not leave much room for other ideas. 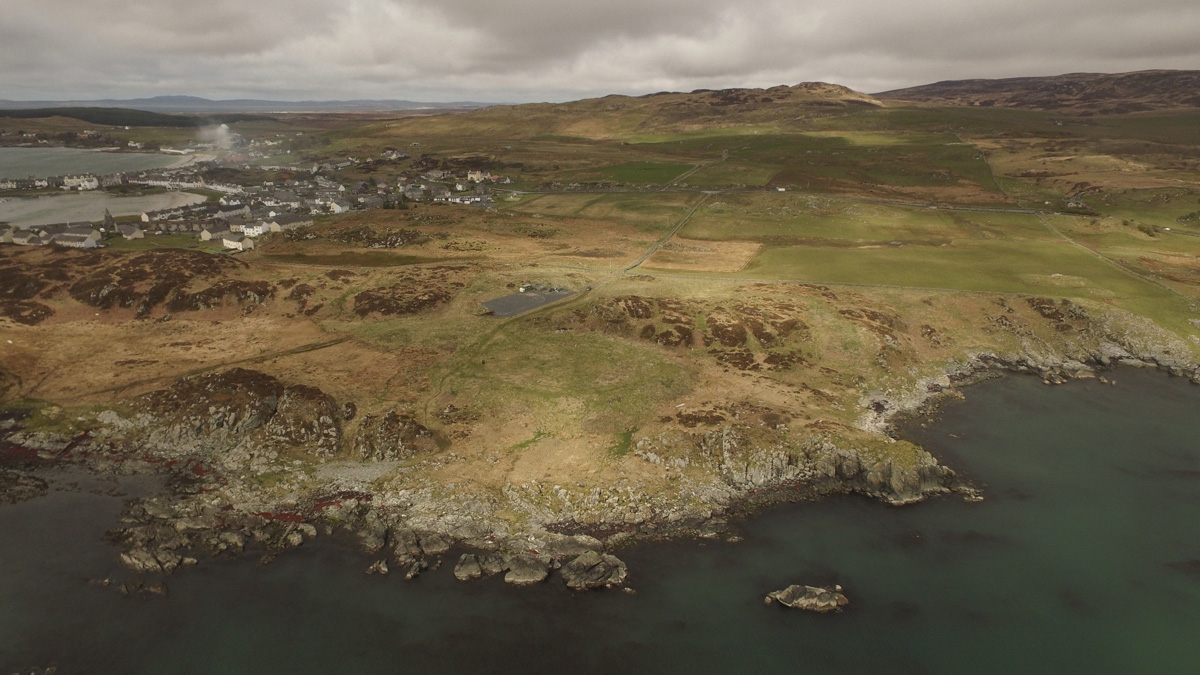 But one thing was certain: if they ever did open a distillery, it would have to be on Islay – that’s how much Sukhinder loves the island, its whisky and its people. And, in response to those who accused him of only wanting to exploit the "Islay" brand, it must be said that, had he at any point realised that he was not doing the island any good, he would have stopped immediately. Hence, his desire for a 100% eco-friendly project.

He would also take every possible step to make sure the whisky he produced would be as close as possible to those single malts of the past that he prizes so much.
Now, brewing an old-style malt, on Islay, in the third millennium, in the midst of the scotch boom - that is indeed a brave feat. Anyone can add a worm tub condenser for everyone to see. But Sukhinder knows that’s not the real secret; rather, it’s what happens before distillation, the choice of raw materials and fermentation. Having a malting floor was a design constraint, but he did not want to give it up. He didn’t choose a decorative floor to please the tourists, but a production process that could really add to the style of his whisky. When you are planning to build a distillery with an output of one million litres a year capable of self-producing 60-80% of all the malt you need, you have a big problem: you need a lot of space.

Finding the right location was less complicated than expected. After visiting a few properties, they stumbled upon a once-in-a-lifetime opportunity. There it was, just outside the town of Port Ellen, on the way to Laphroaig, Lagavulin, Ardbeg - the Holy Grail for any whisky and Islay enthusiast: a large enough plot of land wedged between the sea and the road, a mandatory stop for anyone traveling to the three famous peat distilleries, whether on their way there or back. 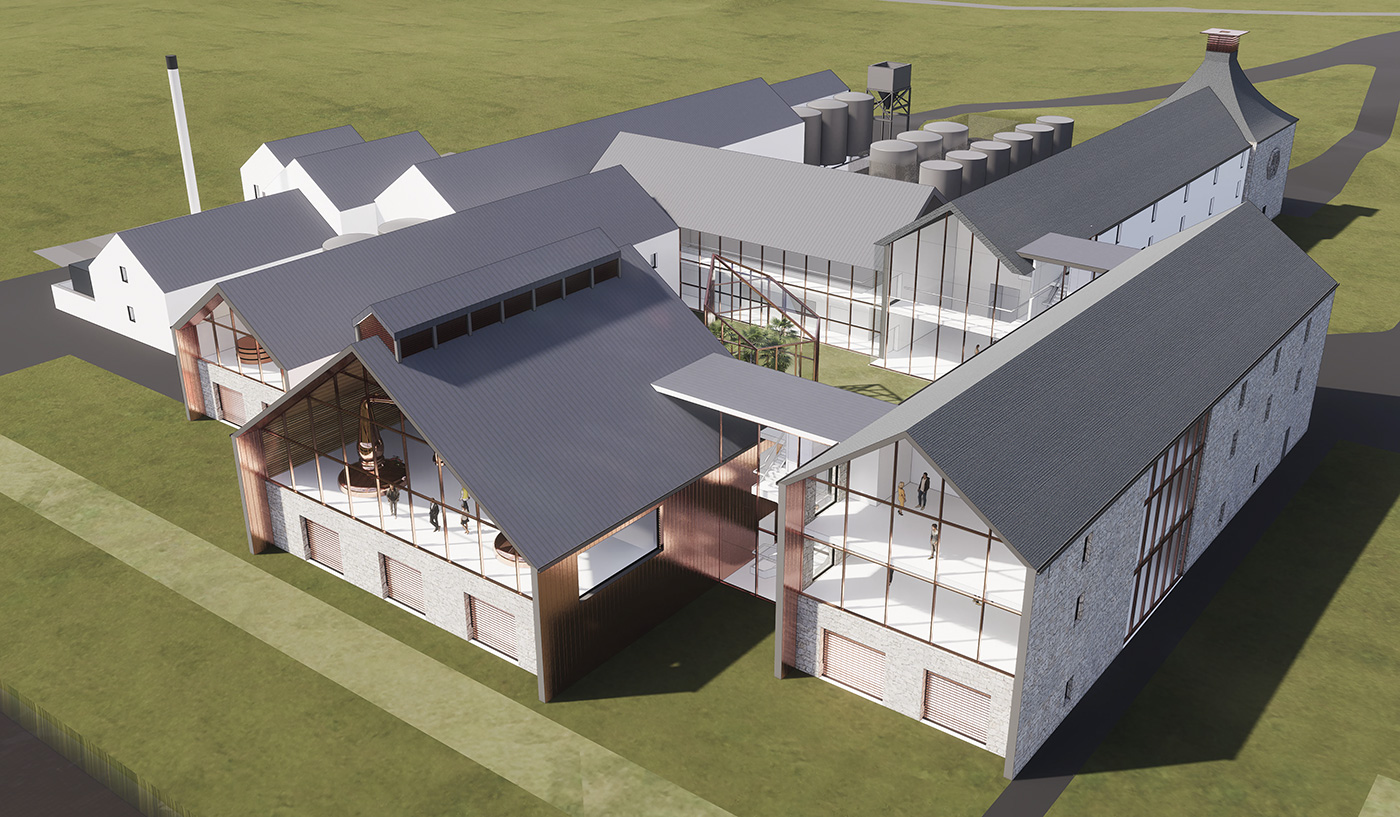 It was love at first sight: the purchase contract was signed in a fit of passion, despite the obvious difficulties in accessing a large enough source of water for their needs. Though surrounded by water, the island was beset by a shortage of fresh water for islanders and distilleries alike. At first, they considered building a desalination plant, but then a more traditional approach won out. Once more inland plots are purchased, an artificial water reservoir will be built in the hills to quench the distillery's daily thirst.

The process of applying for permits for what could become Islay's eleventh distillery could then begin. And here is where the headaches started. The community and the Council did not approve the first project, which was considered a little too futuristic, and asked for a more similar style to the classic architecture of the island’s distilleries. The nerve-wracking sluggishness of public administration combined with the pandemic, which made meetings impossible, stretched out the time for completing the procedures. Permissions were finally granted in November 2020, only landing on the Singh brothers' desk in early February 2021.

During these four years, all available resources have been channelled into obtaining the green light from the Argyll & Bute Council Planning Committee. It is pointless at this stage to ask about the future style of their whisky, the ppm, or the name of the distillery itself. These are all choices they will want to discuss with the person who will eventually become their distillery manager - a figure they have not yet found, although negotiations are in progress.

However, as mentioned, few if any compromises will be accepted regarding fermentation. The distillery will be equipped with two pairs of stills fuelled by wash produced in the most traditional way. The project calls for sixteen washbacks, a large number for a million litres of alcohol per year – a clear indication of Sukhinder's desire for long fermentations. He says he’d like to use wild yeasts, but British and European health regulations frown upon an uncontrolled proliferation of microorganisms in a 'food factory', so a compromise solution will have to be found. One of the washbacks will probably be used for on-site proliferation of a selected yeast strand.

'Old-fashioned' goes as far as the stills. We would all like to picture them bubbling over a crackling, hot direct flame, but this certainly clashes with the distillery's eco-friendly soul. This is leading the brothers to consider other futuristic hi-tech solutions which, without using an open flame, will recreate the same conditions of intense, uneven heating that has proven so beneficial to the structure of whisky.

And this is the traditional part. Yes, because the project involves building not one but two distilleries - a bit like Port Ellen is doing. The second one will be an experimental micro-distillery equipped with a small hybrid still which can be adapted to the production of different distillates. Originally designed for gin, it can then be converted to produce a distillate with a much stronger link to its original ingredients and fermentation: rum!

Producing a non-molasses rum on the isle of Islay sounds like an impossible mission, but it only took Luca Gargano a few seconds to identify the only possible solution: refrigerated shipments of high-concentration sugar cane syrup, which will inseparably link the Caribbean to Islay.

A dream for the Singh brothers, for Luca, for all of us enthusiasts, which may come true in 18-24 months. 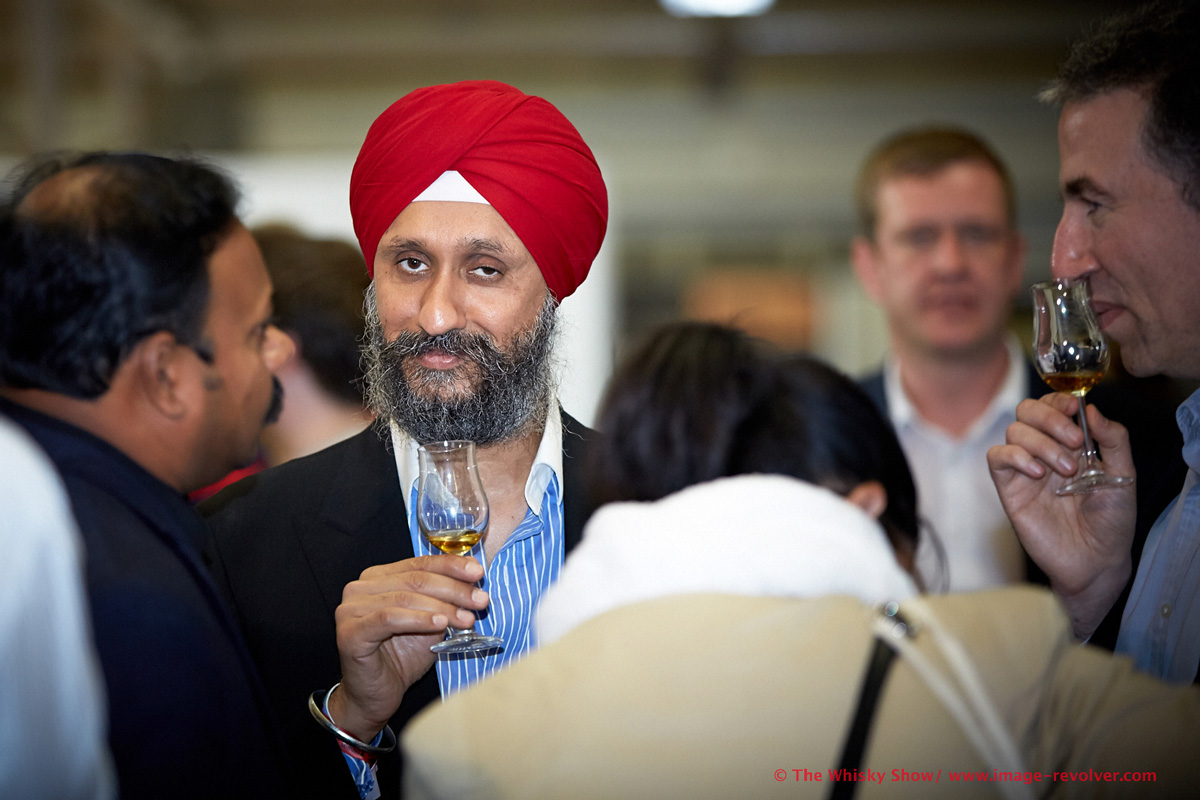 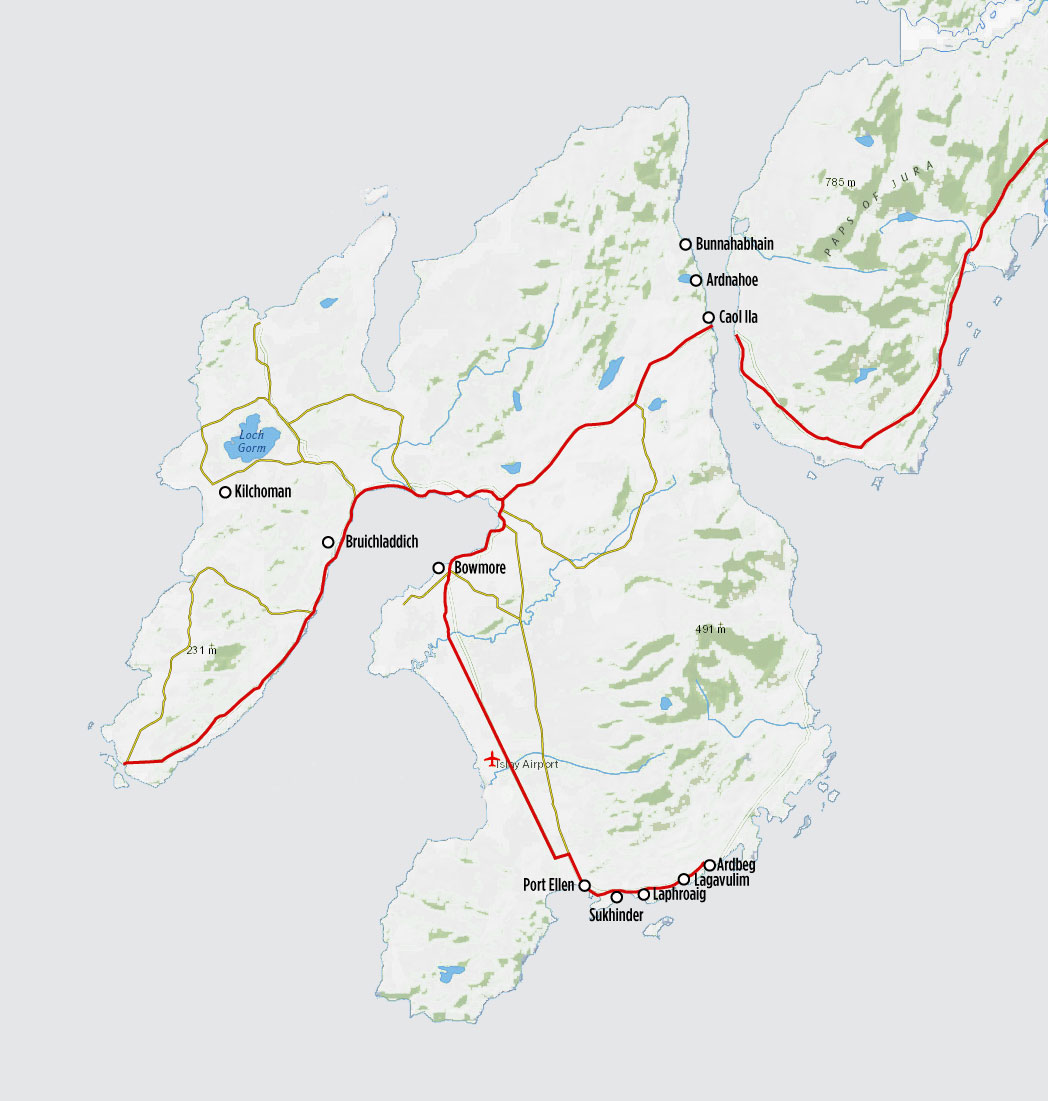 Established in 2005, it was the first distillery to open on Islay after more than 124 years of continuous shutdowns. Located in the north-west of the island, it is surrounded by barley fields, from which it obtains part of the raw material it needs – hence its definition as a farm distillery. After the first few years of uncertainty the owners, the Wills family, managed to get their business off the ground, to the point that in 2019 the distillery was doubled in size. A small malting floor enables it to produce 100% Islay whisky entirely made on the island, from barley to bottling.

In 2013 Stewart Laing left his shares in Douglas Laing & Co to his brother and founded Hunter Laing & Co. Like many independent bottlers, the company suffered from an increasingly scarce supply of single malt casks, hence the idea of creating his own independent source: a proprietary distillery. Noting the steep rise in interest in the isle of Islay, the choice fell on a north-east location with stunning views of the Sound of Islay and the Paps of Jura. It is the only distillery on Islay equipped with worm tub condensers.

This iconic distillery on the isle of Islay, made famous by owner Diageo's 17 Special Releases, has a troubled past. Its experimental soul meant that it was the first distillery to install a customs-certified spirit safe as well as the first Scottish distillery to experiment with distillation columns with Stein and Coffey. It did not survive the crisis of the 1980s. Closed in 1983, it was permanently converted into a malthouse in 1987. In 2018, Diageo’s announcement that it intended to reopen the distillery, which would double as a traditional distillery and an experimental micro-distillery, left enthusiasts baffled and curious to know what's next.

Discussed in this article.