With the Gargano Classification, different types of rum have been classified for the first time mainly according to the method of distillation, creating a category of Pure Single Rums, similar to Scottish Single Malts from the point of view of distillation. Hence the idea of creating a didactic range, in collaboration with the best distillers in the world, by bottling various 100% pot still white and aged distillery rums.

The Habitation Velier project was born in 2015, springing from the close collaboration between Luca Gargano and the best distillers in the world of Pure Single Rum, regarded as the very best expression of this spirit. The aim of the range is to raise awareness in the rum market on the fundamental importance of the distillation process, and in general on production, from raw material to fermentation. And it is precisely to keep the focus on the method of distillation that the labels indicate the alembics used by every producer, as well as other technical information, such as the quantity of congeners - non-alcoholic substances responsible for the product’s aroma - present in the spirit, and the marks, identifying the different types of rum produced by the same distillery.

To date, the range encompasses 45 releases, inclusive of white and aged rums from 11 different distilleries. Indeed, every Habitation Velier rum reflects an original project with truly unique features: a “world première” for each distillery.

White Pure Single Rums are the purest, most quintessential expression of sugar cane and its derivatives (molasses). Having a high alcohol content, they are the next generation rum for all passionate mixologists. Single-vintage rums are aged entirely in a tropical climate, with an angel's share of more than 8% per year, which allows for accelerated natural ageing compared to the European method, at the expense of the quantity of product. The products are all bottled barrel proof, without the addition of caramel, sugar or any other non-distillation element. 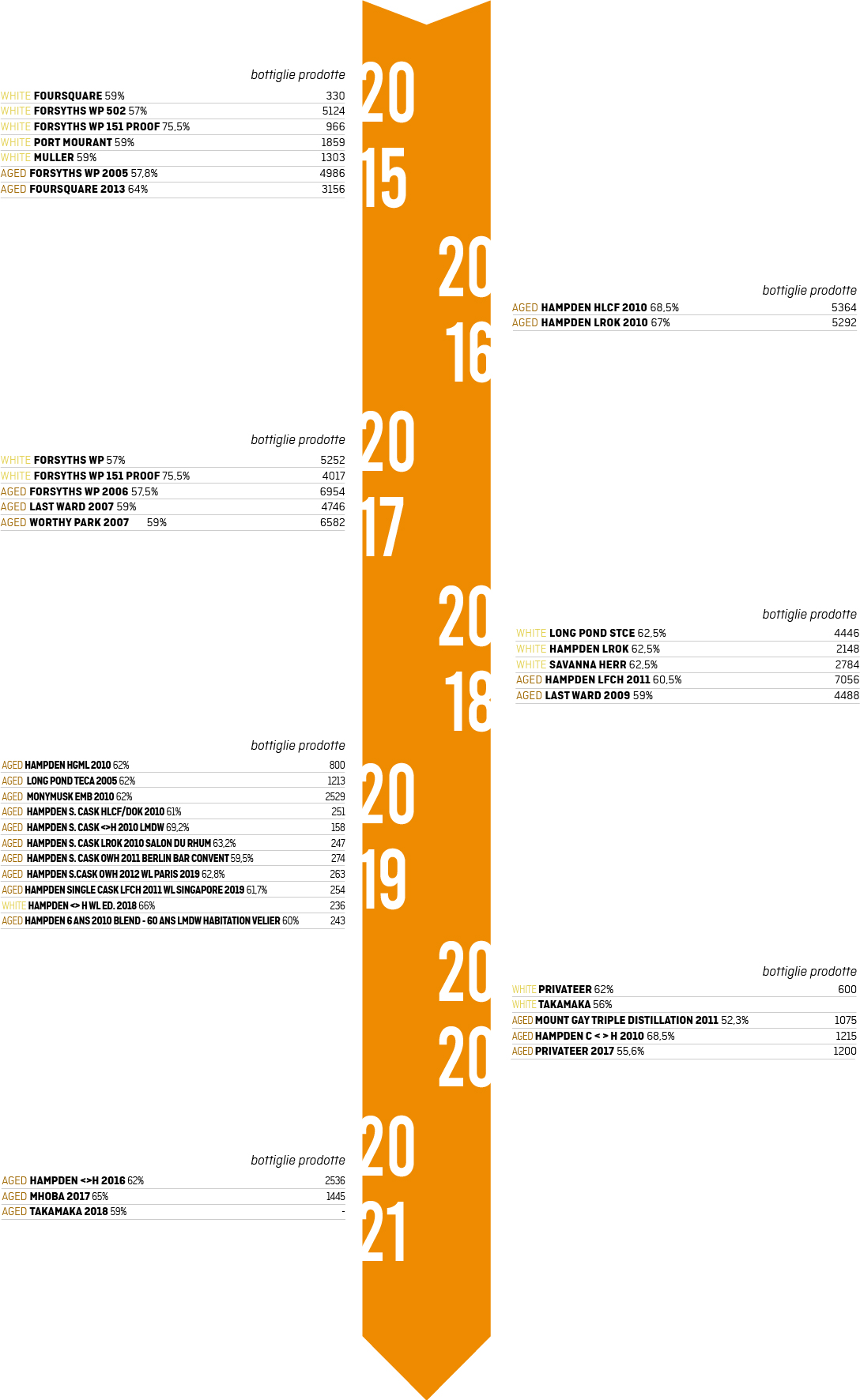 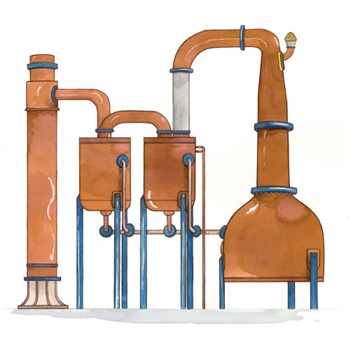 Alembic:
The alembic is a double retort designed and customised personally by Richard Seale, together with Green Engineering in Siena, and assembled in Scotland. In March 2021, Foursquare introduced a new pot still, also a double retort created by Richard. The distillery thus produces from truly unique pot stills worldwide.

Co-bottlings:
In 2015, Habitation Velier created two different products: the first and only version of a White Pure Single Rum (100% pot still) by Foursquare, at 64% ABV, made entirely with local molasses, and the young Foursquare 2013 (bottled in 2015), aged in ex-cognac barrels. 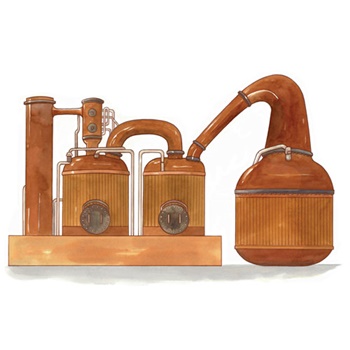 Co-bottlings:
Between 2015 and 2017 we were not authorised to use the name Worthy Park, so we decided - in agreement with the distillery - to name the Habitation Velier editions after the alembic and to use the abbreviation WP, the acronym of Worthy Park. Since 2017 we have been authorized to use the name, and we have started bottling at the distillery. Habitation Velier’s white Worthy Parks were produced using a special fermentation technique which resulted in a truly unique bottled rum. The 2005, the very rare 2006 WPE and the 2007 were the first original Worthy Park bottlings. 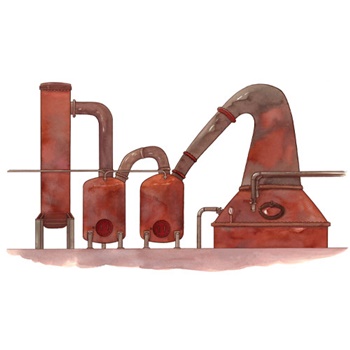 Co-bottlings:
In 2016, Habitation Velier bottled the first Hampden in history: Hampden 2010, mark HLCF, with 550 g/hl of esters. It later bottled, also for the first time, the marks LFCH, LROK, HLCF, HGML, <>H, C<>H. To date, Habitation Velier boasts 13 bottlings, including 2 whites, 6 aged products derived from different marks, and 6 other exclusive bottlings dedicated to the main international events in the rum world, plus a limited edition for the American market. 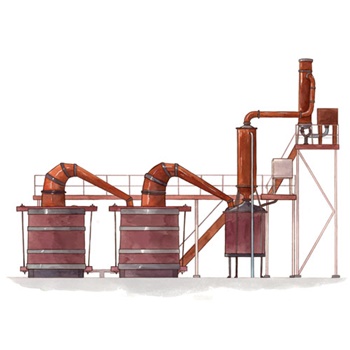 Alembic:
Port Mourant White is produced in the last wooden double retort pot still currently still in use at Demerara Distillers Ltd in Georgetown, Guyana. The result is a spirit rich in congeners, at 537.59 g/hl, bottled at 59°, not cold filtered, and without any additions.

Co-bottlings:
Habitation Velier bottled it for the first time in history in 2015, producing 1859 bottles in total. 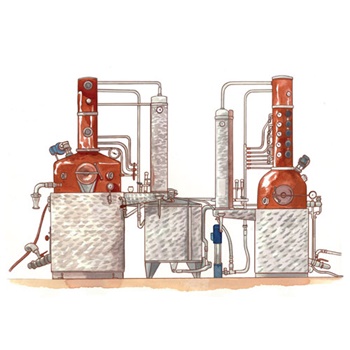 Alembic:
This is a double discontinuous distillation copper alembic, especially designed for Rhum Rhum by the master Gianni Vittorio Capovilla and made in Germany by Muller.

Co-bottlings:
The project was born in 2006 from the joint venture between Luca Gargano and Gianni Vittorio Capovilla to produce “the best rhum agricole in the world, bringing excellence to every stage of production and quality control. In 2015, Habitation Velier bottled a single white version at Marie Galante’s historic alcohol content of 59% ABV. The name on the label, Muller LL IV/3177, refers to the serial number of the alembic. 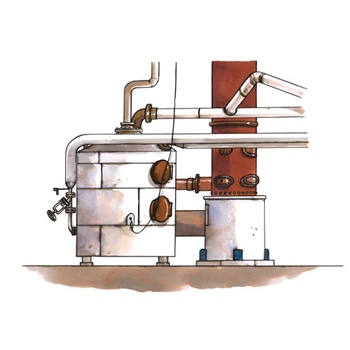 Alembic:
In addition to the use of modern column stills, the Savanna distillery produces the rum forming part of the Habitation range using a small Savalle alembic in stainless steel with a maximum capacity of 9000 litres. In use since about 1996, it was made from scrap material obtained from the former distillery site in the Savanna Estate in Saint Paul, on the west coast of the island of Réunion.

Co-Bottlings:
The first bottling by Habitation Velier of this Savanna produced in pot still took place in 2018, for a total of 2784 bottles. 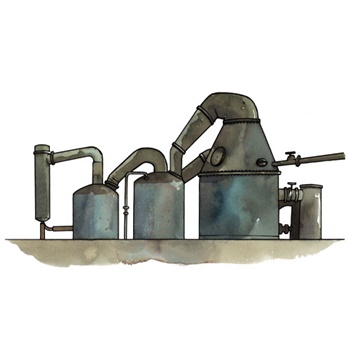 Alembic:
Long Pond uses five Vendôme and John Dore alembics, four with a capacity of 13,200 litres (3,500 gallons) and one with a capacity of 5,600 litres. The distillery also has a Blairs coffey still, but this is no longer in use.

Co-bottlings:
In 2018, Habitation Velier produced a single release, Long Pond STCE White, the first bottling of this mark with 674 g/hl of congeners. In 2019, instead, it released Long Pond Deca 2005, aged in ex-bourbon barrels. 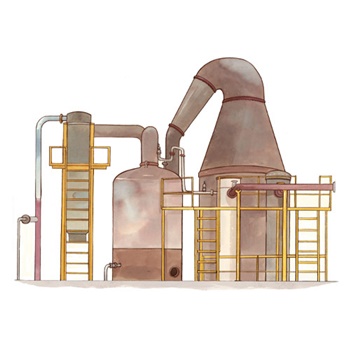 Alembic:
The distillery has two huge double retort pot stills that produce three million litres of absolute alcohol per year. The oldest still, made by Vendôme in Louisville, Kentucky, has a capacity of 20,000 litres, or about 5,300 gallons. The most modern alembic, delivered in 2009 by the Indian Disti-Chem, contains 6,600 gallons. The distillery also has two pot stills John Dore with a capacity of 15,900 litres. 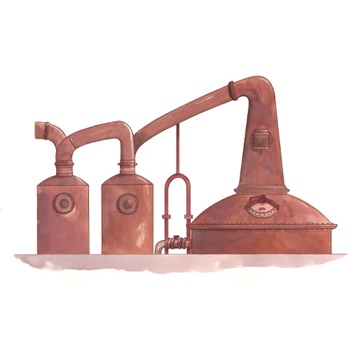 Co-bottling:
In 2018, Velier bought the stock of 100% pot still Mount Gays aged by the Ward family. Habitation Velier began bottling it in 2017 as Last Ward 2009, because initially Mount Gay did not allow us to use the name of the distillery, therefore we coined the name playing on the fact that the 2007 distillation was the last under the ownership of the Ward family. In 2020, Mount Gay gave Velier the right to use its name. 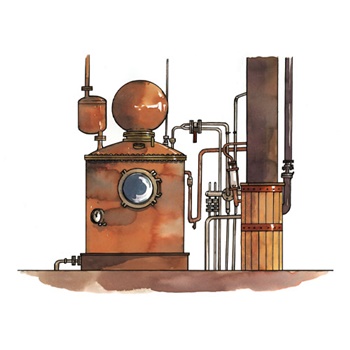 Alembic:
The distillery, based in New England, has one pot still, delivered in 2014 by Vendôme in Louisville, Kentucky, with a capacity of 1000 gallons. 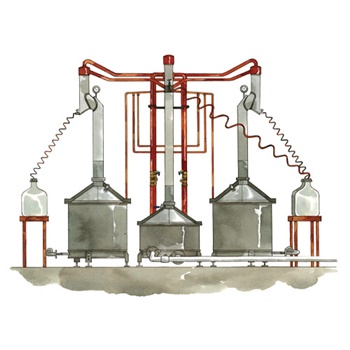 Alembic:
Mhoba Distillery has three pot stills. They are all of the same type, designed and buit by Robert Greaves, owner of the distillery, based on a Nixon-Stone still design. They first two pots are identical stripping stills of 500 l capacity each. The third pot is of a slightly different design and has a 350 l capacity.

Co-bottlings:
In 2020, Habitation Velier bottled Mhoba, resulting from the partnership between Luca Gargano and Robert Greaves. Mhoba 2017, aged for 4 years at the distillery in ex-bourbon barrels, has an angel share of over 22% and 571.3 g/hl of congeners. A total of 1445 bottles were produced for Habitation Velier. 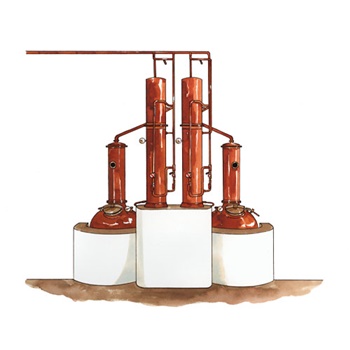