Behind the Scenes with Papa Rouyo 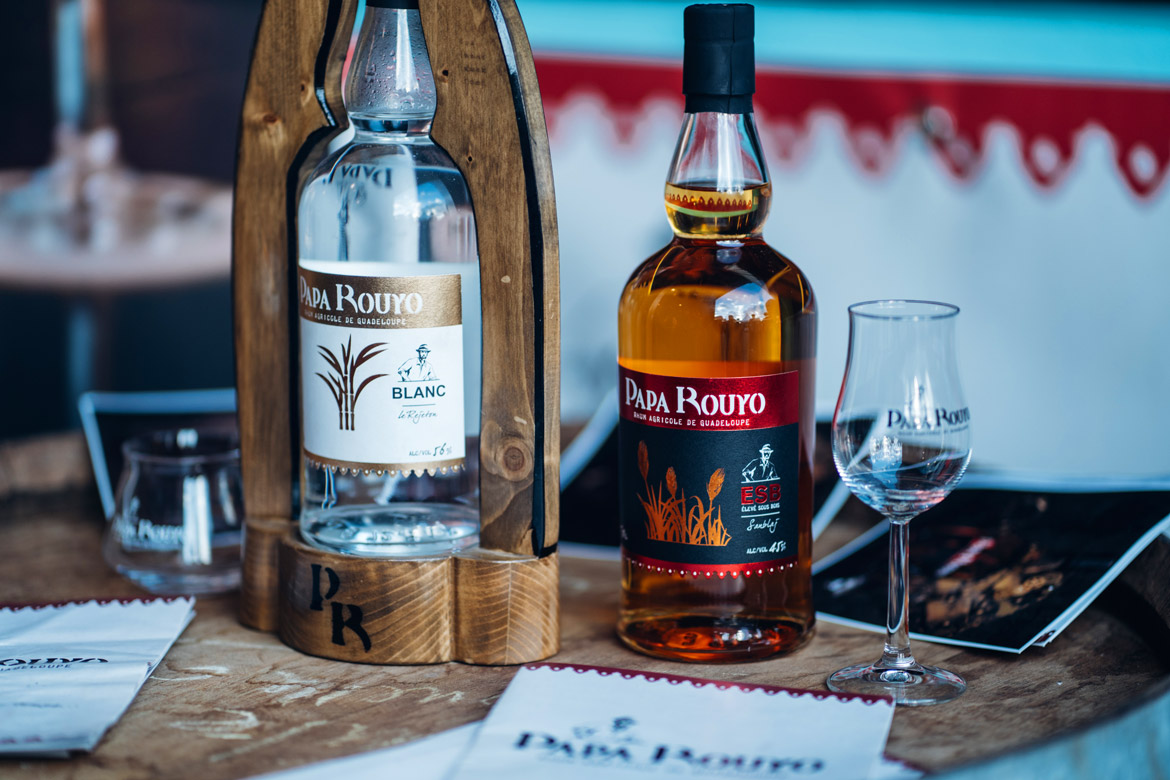 An interview providing a window into the history, production techniques, terroir features and rums of the Papa Rouyo distillery, a Guadeloupe-based rising star in the spirit industry created from the vision of farmer Charles Albert Ruscade and now run by a collective of true “sugar cane masters”.

Can you tell our readers why you decided to call yourselves Papa Rouyo, and what led Joris' grandfather to bring together a group of sugar cane masters with their specific technical expertise?
Papa Rouyo is the nickname of Charles Albert Ruscade, a sugar cane grower born in 1900 in Le Moule, East Grande-Terre, who loved his land and his sugar cane. The distillery project is in part a tribute to him, co-founded with two of his descendants: his grandson Judes Galli and his great-grandson Joris Galli.

We coined the term "Sugar cane masters" (Maîtres-Canniers) to stress the expertise of sugar cane growers and their families. We don't want to restrict this concept to the Papa Rouyo collective, in fact we want it to apply to anyone who has a deep knowledge of the terroir and passion for the land. 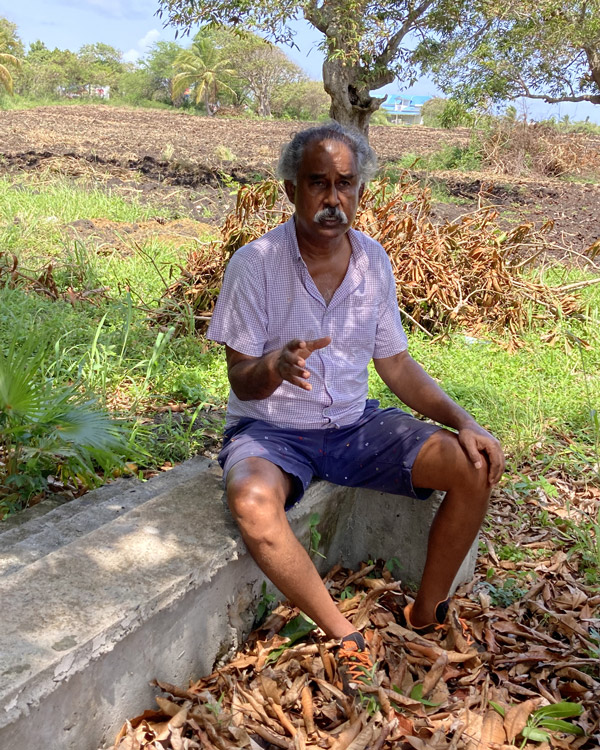 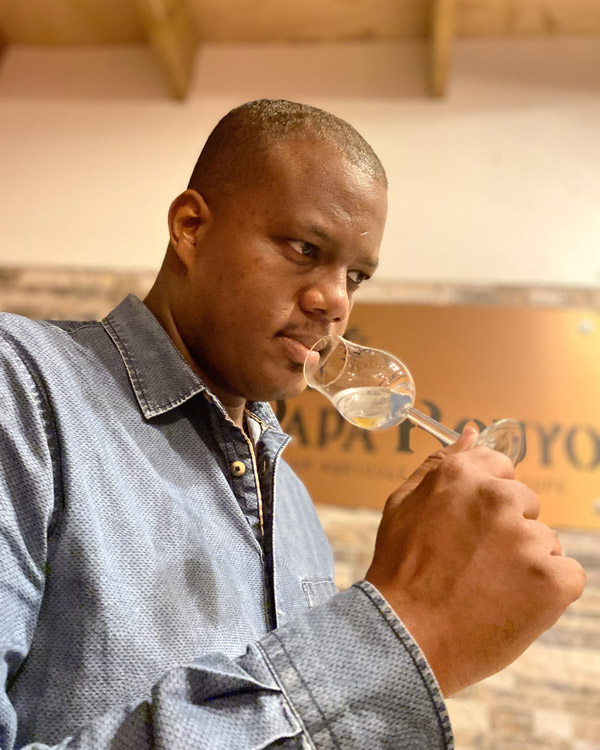 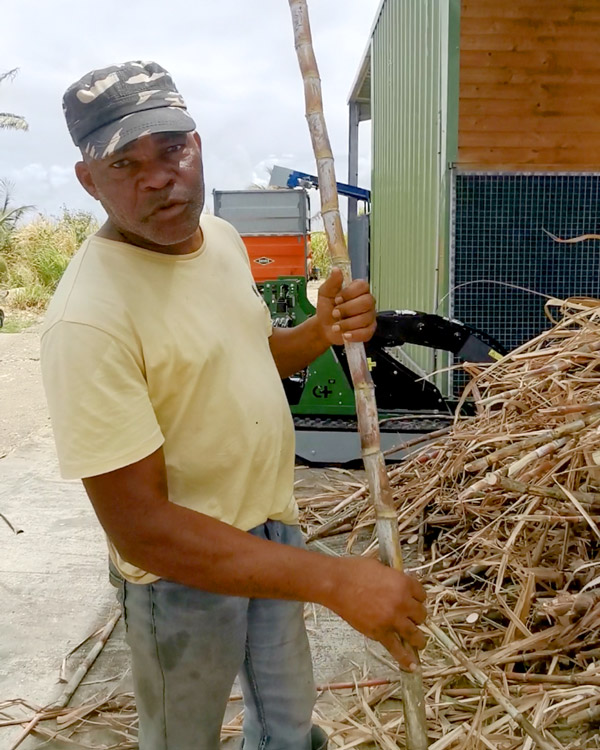 Can you tell us about your terroir? We know that most of your region is predominantly clay-limestone. Can you tell us about the soil in each area (Basse-Terre, Grande-Terre, Marie Galante)?
The concept of terroir is at the heart of the Papa Rouyo project. We believe terroir is the result of the combination of 4 elements: geology, climate, sugar cane variety and, of course, people.

The geology of Guadeloupe is divided into two distinct areas, Basse-Terre (volcanic) and Grande-Terre/Marie-Galante (clay-limestone). Clay-limestone soils - or vertisols - have the double benefit of combining a layer of expansive clay with porous limestone. When water-stressed due to heat, sugarcane seeks water and nutrients deeper down in the soil. This results in the minerality characteristic of rum from vertisol soils.

In terms of climate, the eastern part of Grande Terre is swept by trade winds, which deposit a layer of salt on the sugar cane and protect it from diseases and sunburn. Located between 100 and 400 meters above sea level, Papa Rouyo's plots are ideally placed to benefit from these salt-carrying winds.

Lastly, the central element of this combination is the people. Each farmer has their own specific knowledge and farming methods. We were able to observe the impact of the choices each of them made in the field: soil modification and fertilization, PPPs or no PPPs, irrigation, choice of sugar cane variety, organic farming, plant density, etc. There are several factors at play and, when combined with the unique local ecosystem, these choices determine the quality of the sugar cane crop and, consequently, of rum. 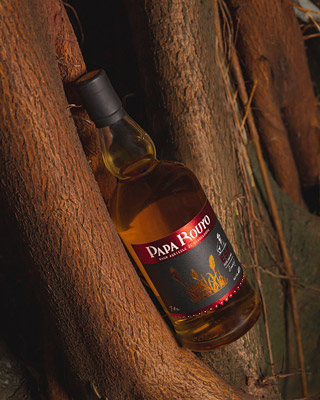 How did you go from being farmers growing and selling sugar cane to partners in a rum production project?
Although it's very different, we often use an analogy with the world of wine. Today many wine producers have become world stars. There are specific training courses to work in viticulture and winemaking. Conversely, in rum making hardly any credit is given to the women and men who work at the base of the production chain. That is why it was so important to us to stress the central role of the people without whom we would not have rum – the sugar cane growers. Of course, at first there was some skepticism, but little by little they came to believe in the Papa Rouyo project.

How many years did it take to get the first drop of Papa Rouyo rum? How many growers initially joined the project and how many are still in it today? When was the last time a new distillery opened in Guadeloupe?
Getting the first drop of rum took about 7 years from when we first discussed the project in 2014 to the first distillation inaugurating our stills in February 2021. At the beginning there were about fifteen people involved; only five of us went on to invest in the project, but we all work together. It took some time, because the local administration hadn't dealt with the opening of a new distillery since 1942 with Damoiseau, of course with the exception of Rhum Rhum founded in Marie-Galante in 2007.

Can you tell us about the sugar cane varieties you use? How many growers do you work with?
We mainly grow two varieties of sugar cane: B80.689, nicknamed matos or caïmite, which originated in Barbados, and R579 from Réunion. The former in superior in quality, has a fine stem and yields a thick juice with an above-average sugar content. The R579 variety, nicknamed "red", produces a thinner juice but has the advantage of being more resistant to water stress and growing a taller stem which captures the wind from the Atlantic and the seashore, located 300 meters from the plots. 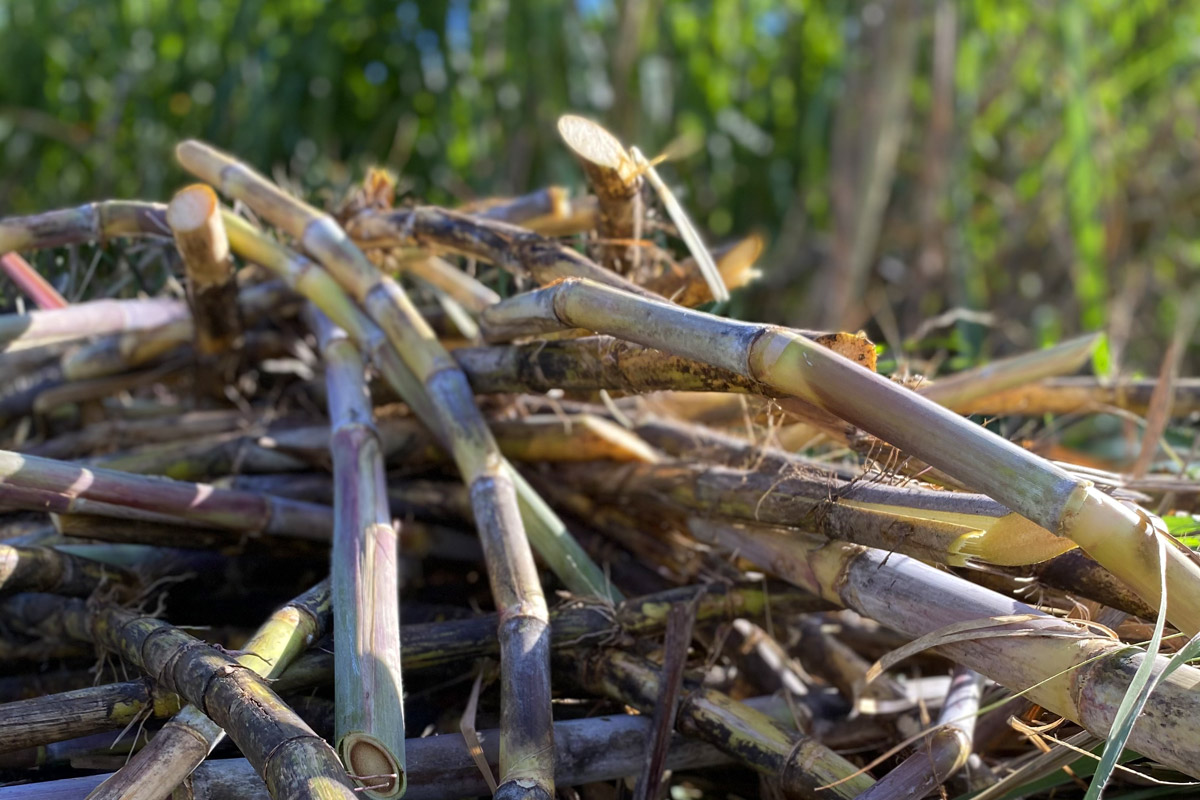 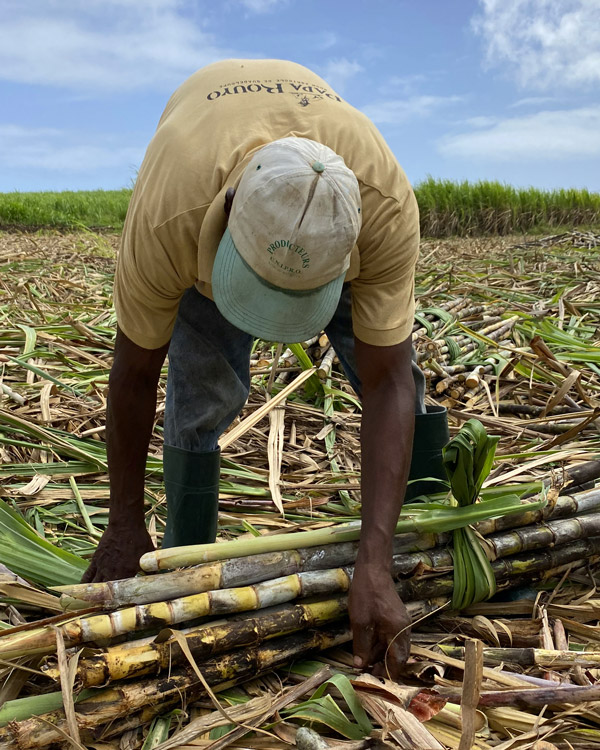 Can you tell us about the battle Joris' family fought against a real estate development project involving the land around Le Moule?
Charles Albert Ruscade had been hired under a contract called colonage (similar to tenant farming in Italy, ed.), at the time widespread in Guadeloupe, in which farmers worked plots of land without owning them. As in any lease contract, lessees have priority right in the event of sale of the property. Shortly before Charles Albert Ruscade's death in the early 1980s, the landowners refused to acknowledge that right.

His eldest daughter Danielle* took legal action, bringing together other families from the city of Le Moule who were facing the same problem. After 17 years of litigation, the court ruled in their favor and the family obtained priority right for the purchase of 4 hectares of land. This plot of land, so rich in history, is now farmed for Papa Rouyo and the cane grown there produced the Habitation Velier Papa Rouyo bottling released last September.

What kind of yeast do you use for fermentation and how long does it last?
We use native Guadeloupean yeast strains hybridized by INRAE (National Research Institute for Agriculture and the Environment). During the cutting process, the cane is not broken into small fragments as it's usually done. This enables to preserve some of wild yeasts on the cane fiber and slows down quality deterioration. However, to ensure continuity in the production process, only one yeast strain is used. Our main goal is for our rum to be the best expression of the Le Moule terroir.

Why did you decide to use a pot still?
In the past, distilleries in Guadeloupe and Martinique also used pot stills. Things changed when the Creole column still was introduced in the Antilles in the mid-19th century. It was quickly adopted instead of pot stills for reasons of greater efficiency in the distillation process. The flavor profile of agricultural rum as we know it today was shaped by the Creole column still. We chose to do things differently and go back to the traditional method. In addition, we wanted to achieve the same consistency and finesse of Cognac and whisky. 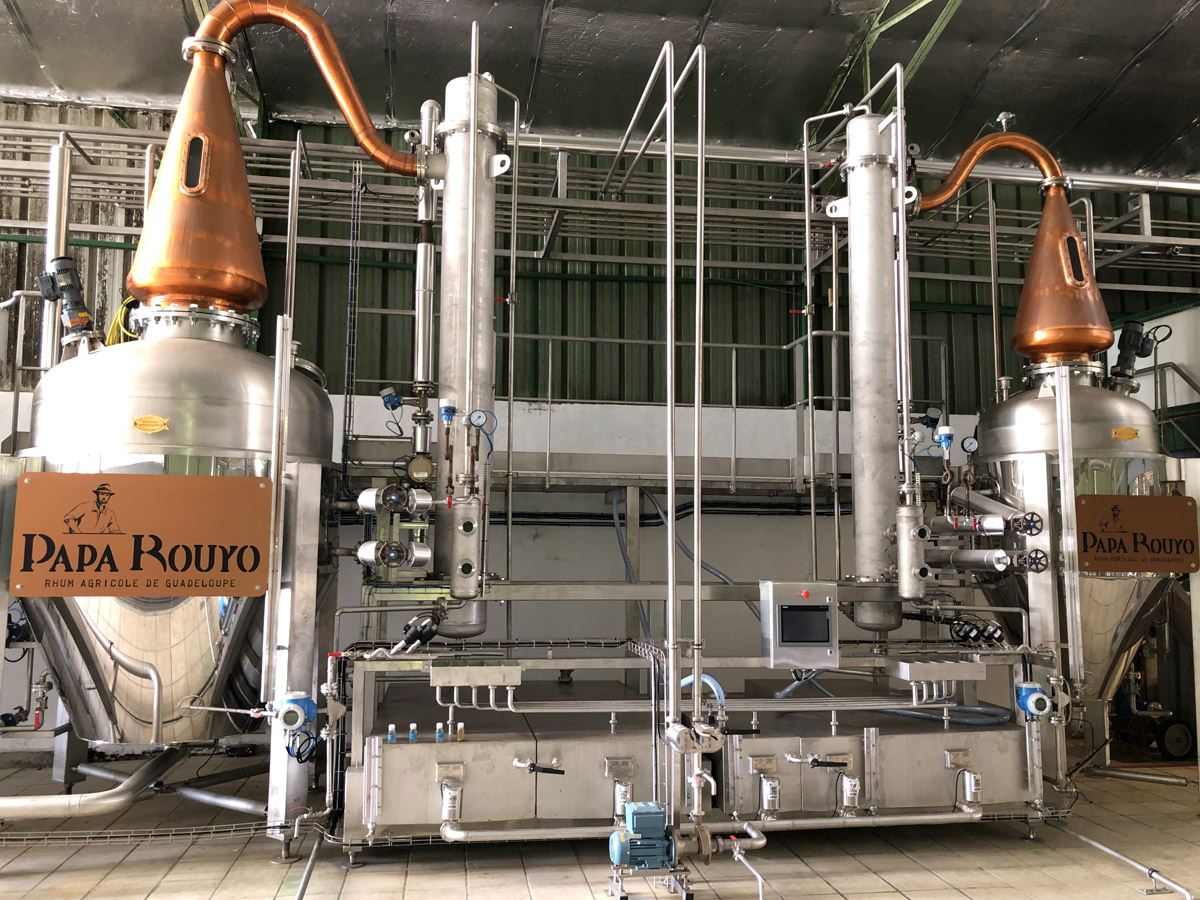 Can you tell us why you decided to use hybrid stainless steel-copper boilers? How are they heated?
Our choice of using stainless steel-copper boilers was based on the chemical properties and PH of cane juice, which is very acidic and viscous. This makes it extremely corrosive and would damage a copper boiler, requiring frequent repairs. On the other hand, a copper swan neck allows us to extract subtle mineral notes during distillation. The stills are steam-heated through a metal double wall, which ensures accurate temperature management. The boiler runs on diesel.

How long does rum mature before being bottled?
That's for our cellar masters to decide. Full grade rum can start aging in barrels or it can be put in stainless steel vats, in which case the resting period varies depending on how much the strength is reduced.

Can you tell us about the barrels you chose to use? Why did you decide against using traditional ex-Bourbon barrels? How do different kinds of barrels affect the product? 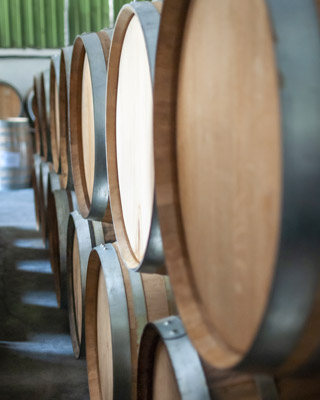 Ex-Bourbon barrels are the most widely used in the spirits industry as they are usually inexpensive and available in large quantities. However, aging in ex-Bourbon barrels produces very standard aromas - caramel, roasting, charring. In keeping with Papa Rouyo's aging policy, we opted for two different types of barrels: ex-Cognac barrels and 400-liter virgin oak barrels. The ex-Cognac barrels are sourced from different Cognac distilleries. Each year they release about 3% of the Cognac they’re saturated with, which influences the flavor profile of our rum.

Two varieties of virgin oak are used, American and French. American oak infuses rum with notes of pastry, coconut and vanilla, but not much color or tannins. By contrast, French oak produces a woody, robust, tannic rum. We are currently experimenting with ten different toast levels, from lightest to strongest. This is an extremely interesting variable as toasting infuses rum with very subtle, complex flavors.

Oak variety and origin, wood grain size, barrel volume and toast level are all parameters that we can adjust to create a unique identity for Papa Rouyo rum. 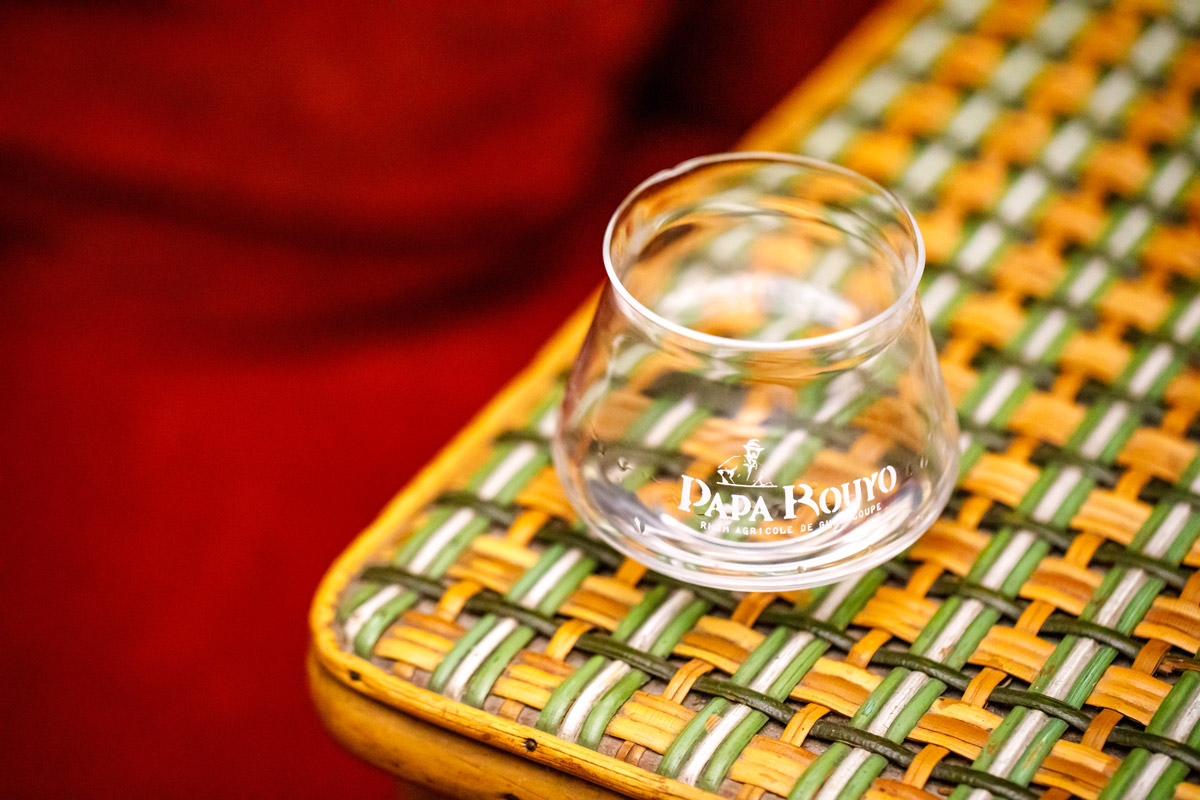 Can you tell our readers why you call your rum rhum agricole de terroir?
We proudly chose the name Rhum Agricole de Terroir as it is very clearly descriptive of our philosophy - our focus on terroir and the farmers who make it all possible, whom we call "sugar cane masters". Of course, we cherish our Guadeloupean identity, but Papa Rouyo is actually the adventure of a collective of farmers who wish to celebrate a farmer and sugar cane grower. We strive to place emphasis on the entire farming process that comes before fermentation, distillation and ageing - which in the world of spirits is all too often neglected and lacking in transparency.

How did you meet Luca Gargano? You chose to give him a white rum from a sugar cane variety grown on 4 hectares, and today this amazing rum is part of the Habitation Velier selection. Can you tell us about this particular terroir, the sugar cane you used and the farmer who grows it?
True to his reputation as a rum explorer, it was Luca Gargano who discovered us before we even marketed our first rum. We'd been visiting trusted friends and professionals to present our project and future products. Among our visitors, some people close to Luca were impressed by our story, philosophy and first juice. Eventually Luca contacted us and asked for selection of samples, so he could get an idea... and he liked it! In the end he chose our 100% Canne Matos from the historic Papa Rouyo plot, now farmed by one of our sugar cane masters, Tim Synésius.