Caroni: a veritable encyclopedia about a legendary rum

We present a new, extraordinary book about Caroni - virtually a two-volume encyclopedia encapsulating the history and comprehensive information about a rum "that no one used to want but is now a true legend".

With an exclusive interview with the author, Steffen Mayer. 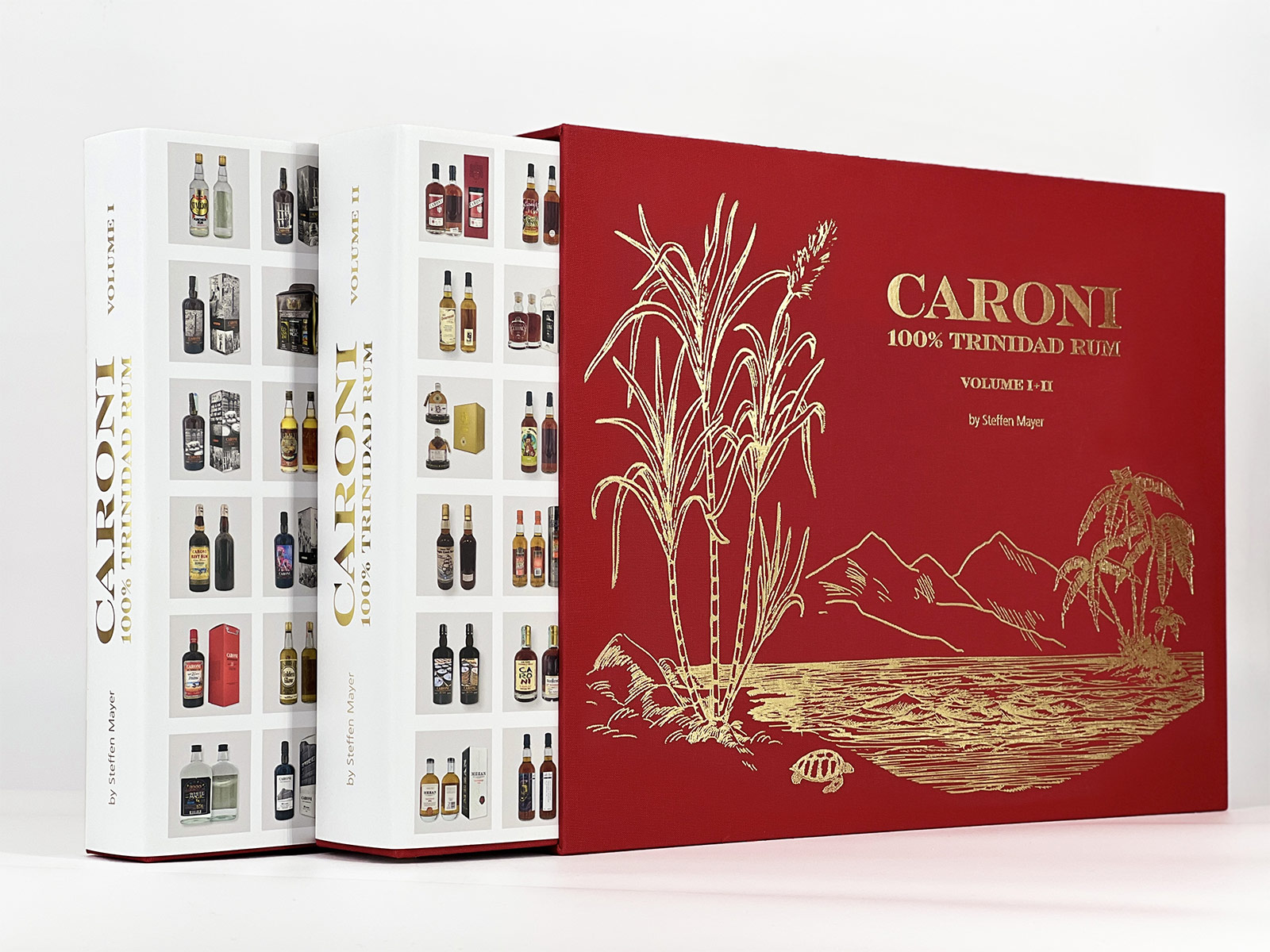 After five years of in-depth research, Steffen Mayer has finally published his book, a must-read for all real rum lovers. This impressive oeuvre comes in a two-volume box set completely made in Italy in a prestigious 36 x 21 cm horizontal format, for a total of 1136 pages and an impressive 9.4 kg in weight.

As all rum enthusiasts and experts are well aware, there has been - and still is - a lot of misinformation about Caroni. This is because as long as it was open, the now world-famous Trinidad distillery was considered rather insignificant in the world of rum as it mainly produced for the local market and there was very little information available about it. This only changed in 2004, when Luca Gargano rediscovered the distillery's barrels in Trinidad and proceeded to acquaint the world with the real merits of this amazing rum. Today, because of its fame and the difficulty in finding reliable information, many stories circulating about Caroni are false, inaccurate or even outright speculation based on half-truths.

For these reasons, Steffen Mayer's double volume is to be hailed as an especially valuable resource for enthusiasts and collectors alike. 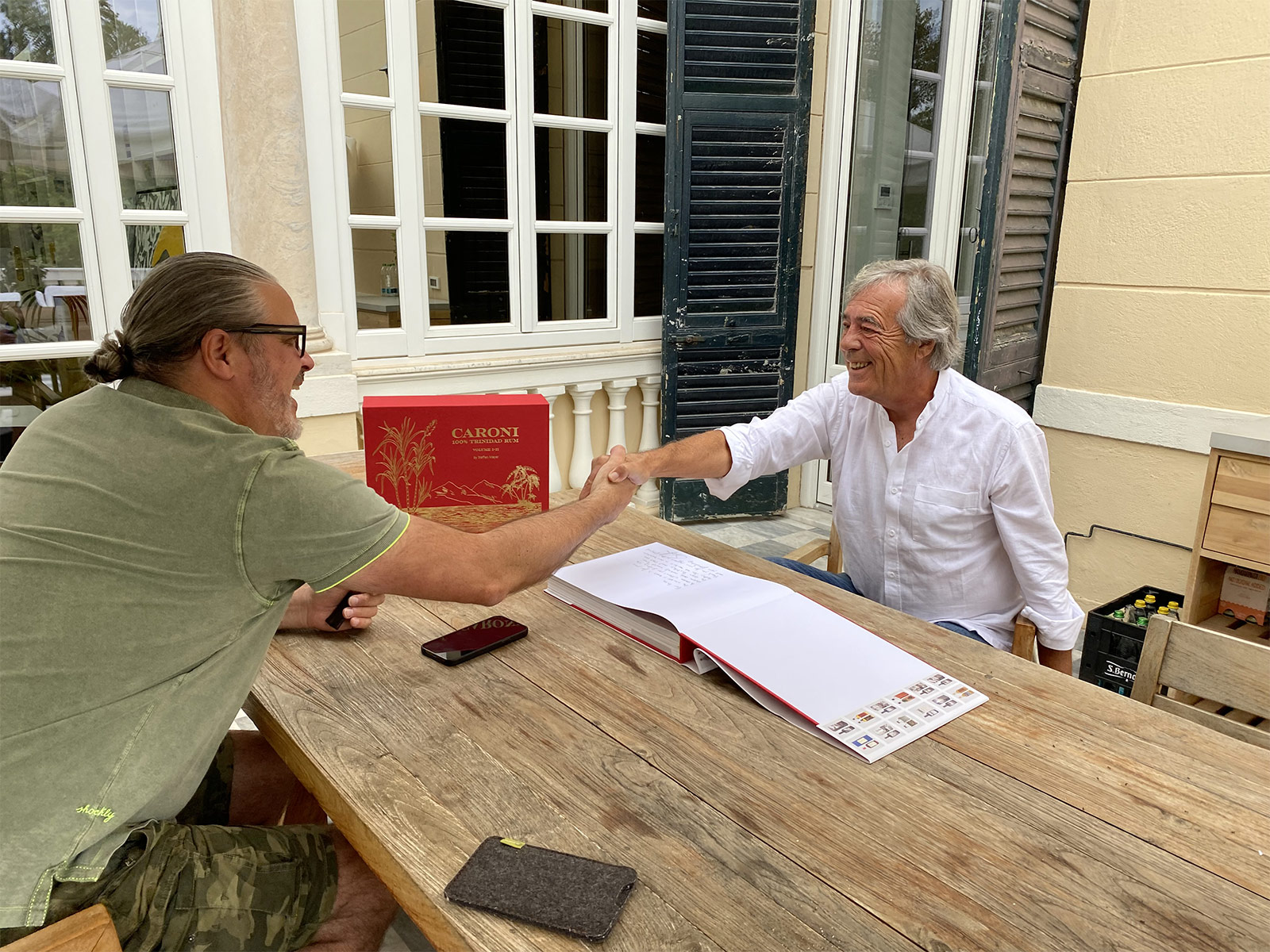 Mayer's book is in fact based on documents and first-hand accounts that allowed him to collect an enormous amount of information, probably all of that is currently available about Caroni.

To achieve this, Mayer spoke with every manager of the Caroni distillery since 1980, with Vijay Ramnarine, who was responsible for distillation, and with the assistant to the lab director, who also worked under Rudy Moore right until the end. They all helped Mayer expand his collection of original documents and provided a wealth of details on barrels and bottles, about which there was much falsehood and very little information available at the time.

Through very accurate reconstructions, Mayer has been able to provide an unexpected abundance of information - from details on fermentation to the influences that shaped Caroni rum over the years, as well as what distillation methods were employed, what rum brands were produced besides LTR and HTR and how they were made, whether there are bottles with inaccurate data or other incorrect information, and what happened to the distillery's over 18,000 barrels.

But before getting to all that, right from the outset Steffen Mayer emphasizes the significance of Caroni in the history of rum – primarily a cultural significance, considering Caroni's symbolic and iconic relevance. We know that every sip of this rum is a fragment of history, a rarity that "has shaped Trinidad for almost a century," as Mayer himself writes. 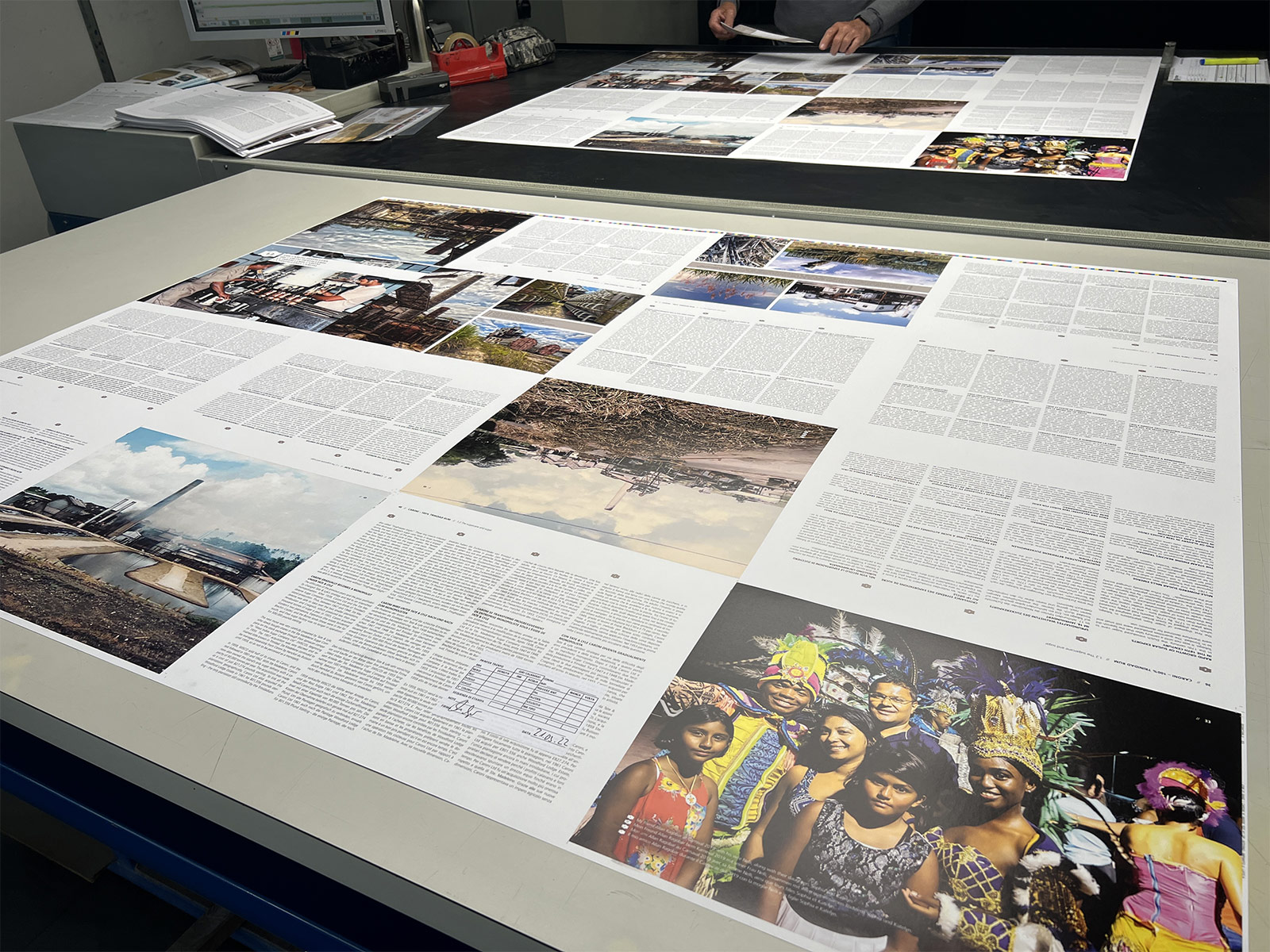 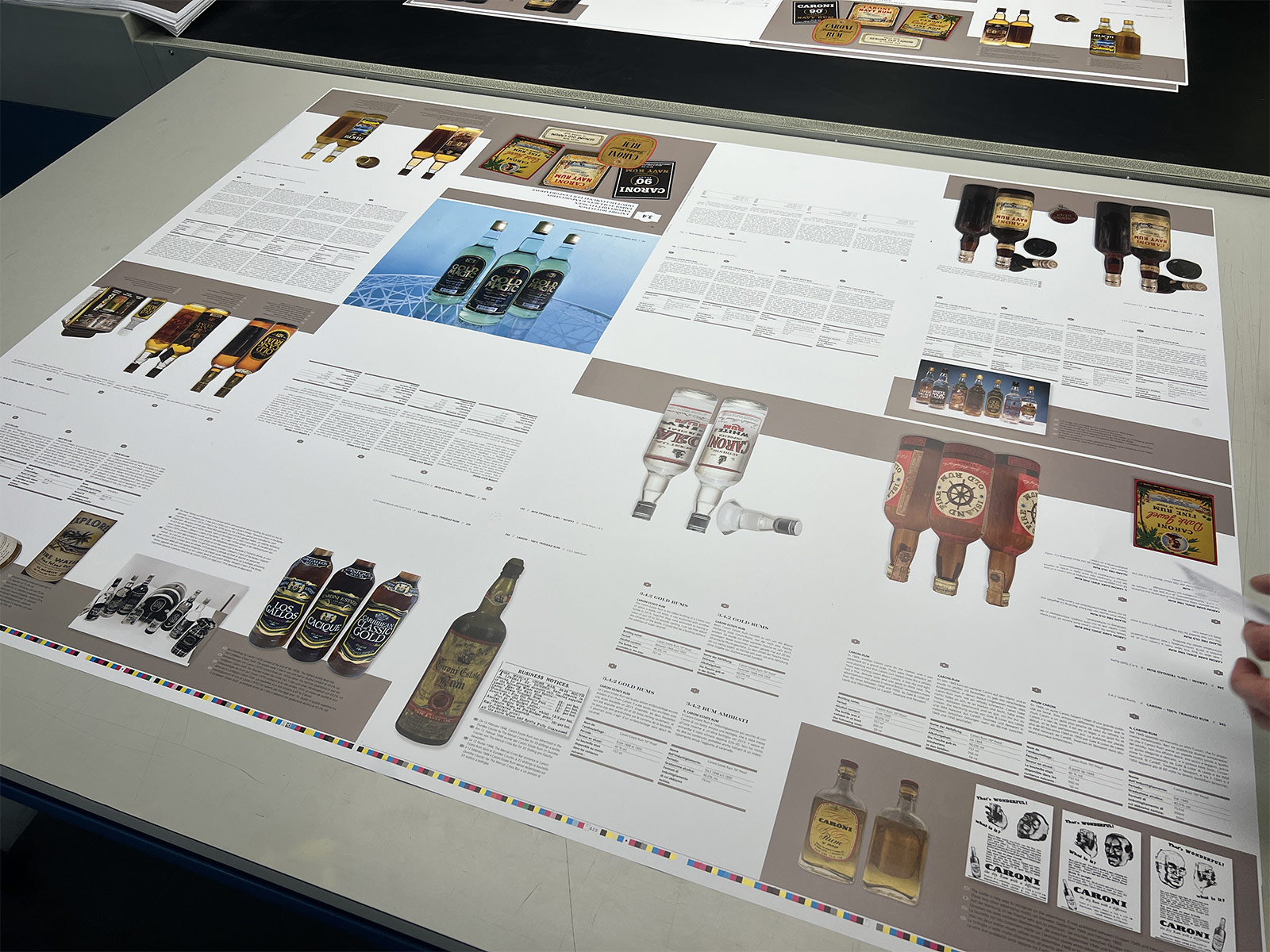 Overall, the two volumes offer an in-depth look at the entire rum industry, past and present. To help readers understand the historical importance of Caroni within this world, Mayer first talks about his first experience with rum in general and with Caroni in particular. It took place, literally by chance, in 2013, when he purchased a bottle without having any knowledge of how important it was. Since then, Steffen Mayer's passion for rum has grown to such an extent that he ultimately became one of the world's leading rum experts, and now the author of this unique double volume.

The book also retraces step by step the long and complex history of Caroni - the history of the distillery as much as that of its barrels and bottlings, complete with priceless details, documents and reconstructions. It outlines the demise of the sugar cane and distilling industry in Trinidad from different perspectives - the local population, the employees and the last distillery in Trinidad, Angostura. Mayer then relates of the incredible discovery in 2004 of the distillery's stock of barrels by Luca Gargano, the key role Rudy Moore played and the appraisal of the barrels by Carsten Vlierboom from EA Scheer.

Mayer also dedicates a large section to our own Luca and Velier, describing not just how the abandoned barrels were discovered but also the subsequent efforts to promote and market the rum, not to mention comprehensive technical information on Velier-Caroni bottlings as well as a general explanation of Luca Gargano's philosophy and his central role in the history of this spirit.

Mayer then goes on to provide an overview of rum production and the specificities of Trinidad rum. This is where the book reveals Caroni's fermentation and distillation methods; the aging processes; rum ages and preservation and packaging techniques; and sheds light on "the last mysteries" of the Caroni distillery's stills and equipment 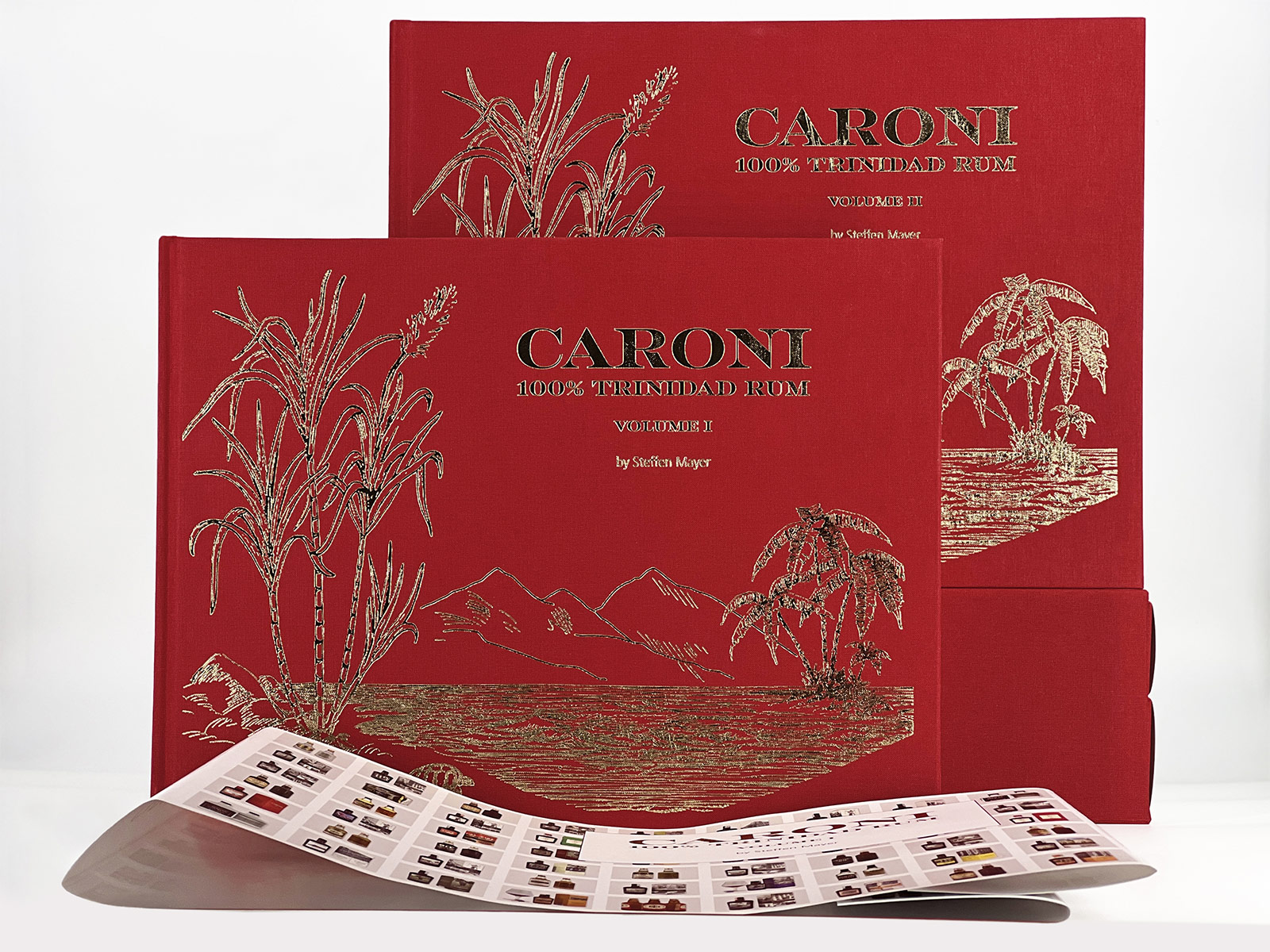 Of course, considerable attention is paid to bottlings. In this section, readers and collectors can find pictures of and information about every Caroni bottling. The illustrations include all of the original bottlings known before, and all of the bottlings after, the distillery's closure. The data and pictures are complemented with detailed information such as the correct number of bottles per bottling - something many collectors had been looking forward to for some time - as well as basic information on bottlers.

In this section of the book, Mayer also calls the rum collector's attention to a number of issues, including bottle acquisition and storage as well as recognizing counterfeits, to which the book devotes a whole chapter.

Another section of particular relevance to enthusiasts focuses on the quality of the different bottles. To quote Steffen Mayer, "Caroni is not just Caroni, there are huge differences in quality and many other brands besides HTR and LWR. I realize that Caroni rum is becoming increasingly rare with every glass drunk. I am one of those people who are willing to pay far too much for a bottle, to have the chance to taste it and inform my opinions. But when I saw what some people are prepared to spend on Caroni bottles that are ‘questionable’ in terms of quality, I thought that by writing this book I could help readers make better informed, more conscious purchase choices."

The book Caroni – 100% Trinidad Rum is a limited edition of only 2,072 individually numbered copies. It's a multi-language book with text in English, German, French and Italian.

Steffen, your passion for Caroni is well known. Can you tell us how it all started?

When I ordered a bottle of rum one day, I added another bottle of rum to the shopping cart to avoid paying postage, it was a bottle of Caroni 1996. I didn't know Caroni at the time, but found it interesting to read about it on the shop page was read. I didn't open the bottle at first. A year later my brother-in-law, an absolute whiskey lover, visited me at the end of 2016 when I had just quit my job, because I realized that I work too much and have to change something in my life. He said: "Steffen open an interesting rum!" The only unopened bottle was the Caroni so I opened it. We both thought it was very good, but I almost had to give my brother-in-law some tranquilizers, he totally freaked out and said: "This is awesome stuff, it's really crazy, how much does something like that cost?" I just said: "Not much, I only bought the rum to fill up my shopping cart so as not to pay postage, but wait, I'll google it." Then I was shocked, the Caroni cost a multiple and I asked myself why? My research began.

Can you tell us about this book? We know it took you years to complete it. How difficult was it to work on it, and which are the contents you are prouder of?

Yes, I stumbled across this project. It wasn't easy at first because it was my first book project and some didn't take me that seriously. But after five years of full-time research, that quickly changed. Luca was one of the people who believed in me from the start. I will never forget it, when I first came to Genoa and Luca said to me: "Steffen, here you have a folder with all the e-mail traffic between Velier and Rudy Moore, all the invoices, bottling information and more, that affect Caroni." I asked, "May I take a picture of it?" Luca said, "Of course!" This openness was incredible for me, I'm very grateful for that to this day and it was the cornerstone of my work that I was able to build on.

When Covid-19 started, many people were in lockdown. In Trinidad it was particularly strict and people got bored. It was a blessing for me because I was able to conduct incredibly extensive interviews with former Caroni employees.

What I'm particularly proud of is the whole book, the many friendships that have developed over the years, and the hundreds of positive letters and thanks for the book I've received from around the world. 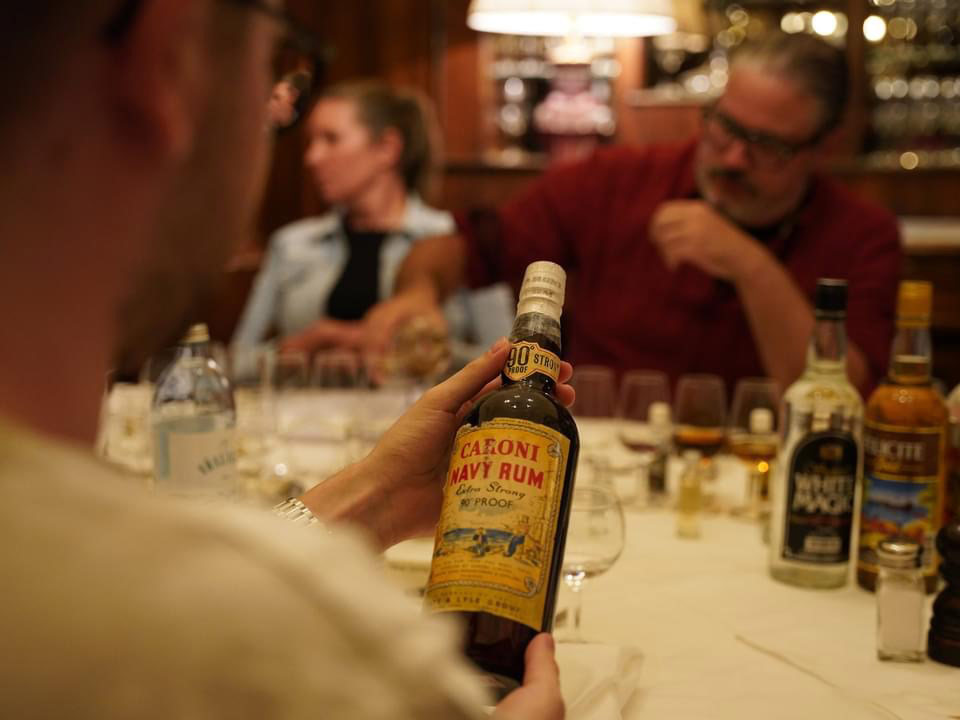 Ohh, there are many. Caroni was closed in 2003 and every interview partner was able to speak to me very openly as there were no longer any trade secrets to protect. There are profound insights that not only affect Caroni, but the whole rum industry. There is much more information in the book than you can imagine. From production to marketing of the more than 18,000 barrels. For example, between 1982 and 1985, in some casks were added Paxarette, a concentrate of sherry, for aging. This is what makes the 1982 Velier Caroni with 77.3% such an extraordinary spirit. On the palate it provides a true taste explosion and you would never get the idea of such a high alcohol content.

One of the most precious contents in your book faces the problem of counterfeiting and fake news for Caroni. Have you got any tips for avoiding being fooled?

Yes, there is a chapter about that in the book. I think the main problem is people's obsession with collecting. You can't buy a bottle on Facebook for a few thousand bucks from someone you don't know, just look at a photo and immediately send the money to the seller, who may be a scammer and doesn't even have the bottle, just to make sure that no one else gets the bottle.

I think the most important thing is gut feeling. If that tells me something is wrong with the bottle, then it usually is like this. If you don't know the seller you should always ask for more pictures of the bottle, if he don't send more pictures, it's always an indication that he don't have the bottle. If there is parafilm over the capsule, he should remove it to see if everything is ok.

The main problem are empty bottles that have been refilled. You can recognize them by the traces of rum on the label of the bottle, as drops of the rum ran down the bottle when it was poured.

If anyone would like an expertise, please feel free to contact me. My email address is: steffen@caronirum.de

A very personal question: have you got a favorite Caroni?

I am often asked this question. I like Caroni in general, but one of my favorites is Velier's NO SMOKING. Now that may irritate some fans, but yes, I like it dirty...hahaha. Taste is something very personal and varies a lot. That's why I didn't talk about taste in my book and made the book interactive. Below each image of a bottling is a QR code and if you scan it, you will receive the tasting notes and the rating for the respective bottling. RumX makes this possible with its global rum community.