Behind the Scenes with Beenleigh 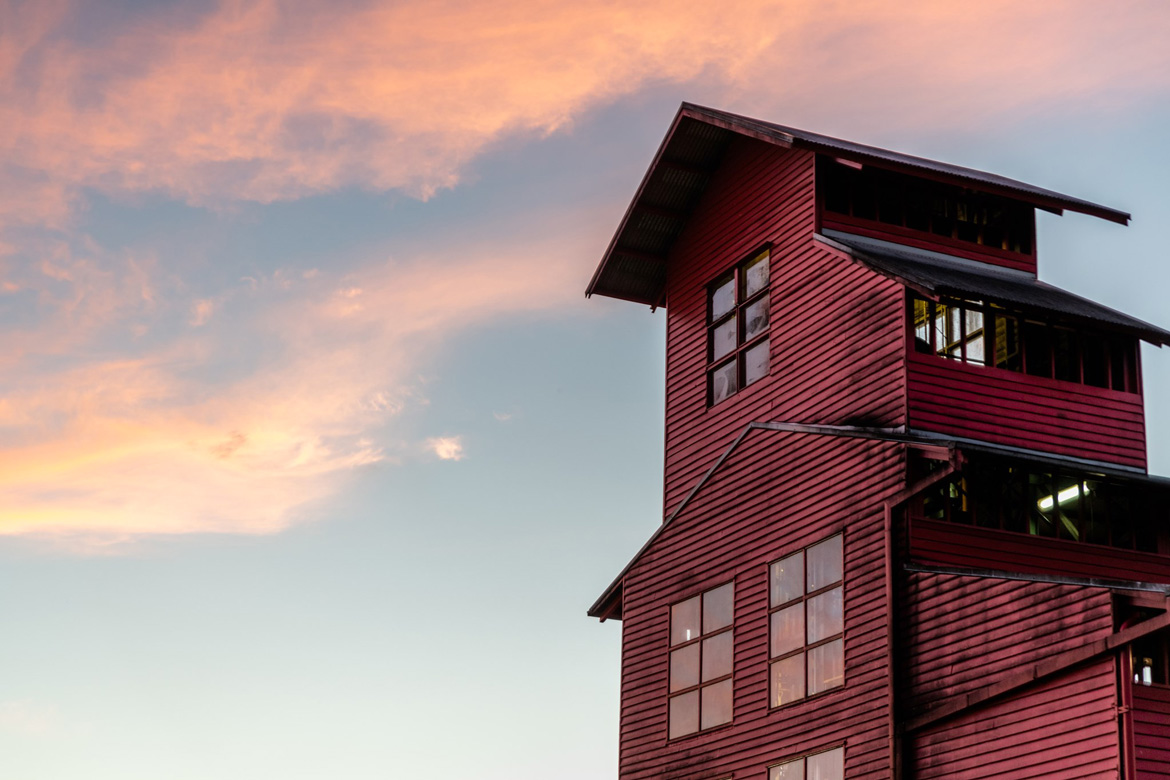 An interview with Steve Magarry, production manager at Beenleigh, to learn more about the products of the most ancient distillery in Australia, and also about history of rum production in this boundless and little explored continent.

How have you met Luca Gargano?
Amongst the unparrelled global Rum collection of Luca’s are several Beenleigh Distillery bottlings that date back several decades including 1940s-1950s era Australian Double Pot Still Rum ‘As Supplied to the Royal Navy’. In Australia our Rum provenence dates back to the 1860s with much influence from Barbados, Jamaica and Guyana distilling and maturation preferences and here at Beenleigh we are Australia’s oldest operating distillery, heritage-listed and founded in 1884.

Luca is a pillar of the global rum industry with his industry experience, influence and legacy – it was ony natural we connected to discuss all things Australian Rum and specifially Beenleigh rum history amongst context of the global industry and the legacy of Caribbean and Guyana Rum provenance here.

Can you tell us something regarding the origins of your co-bottling? How did you get this idea?
Absolutely – the inspiration for the Velier co-bottling is a collaboration of the old and new Beenleigh that spans across 137+ years of Australian rum history, yet remains relatively unknown across Europe. The Velier bottles are synomous across the industry for world-class quality rums that showcase only the very best. Our distillery is a previous IWSC Rum Trophy recipient and there is much to explore across our vintage stocks. It is an absolute honour to be considered by Luca & the LM&V team that Beenleigh Rum is a ‘diamond in the rough’, or ‘undiscovered gem’ – to reveal to the world for all to enjoy.

If we look back on the history of the Royal Navy tot – Australian Rum supply was contracted for several decades spanning both World Wars and was included in the Navy Rum blend up to the 1960s. Our 1940s-1950s Double-Pot Still Beenleigh Rum bottlings that Luca has in his collection spurred the interest in a ‘retro’ label design to celebrate history and significance of our 137+ years of operation.

Our oldest vintage released to-date is the 2006 bottling  which indicates the depth of our stocks at 15 plus years here with 100% Tropical maturation at origin. However, we wanted to provide a contrast to consumers for them to explore our fine Australian Rum which was the concept behind the 2015 Desert/ Arid maturation which offers a very different experience for numerous reasons compared to our 2006. 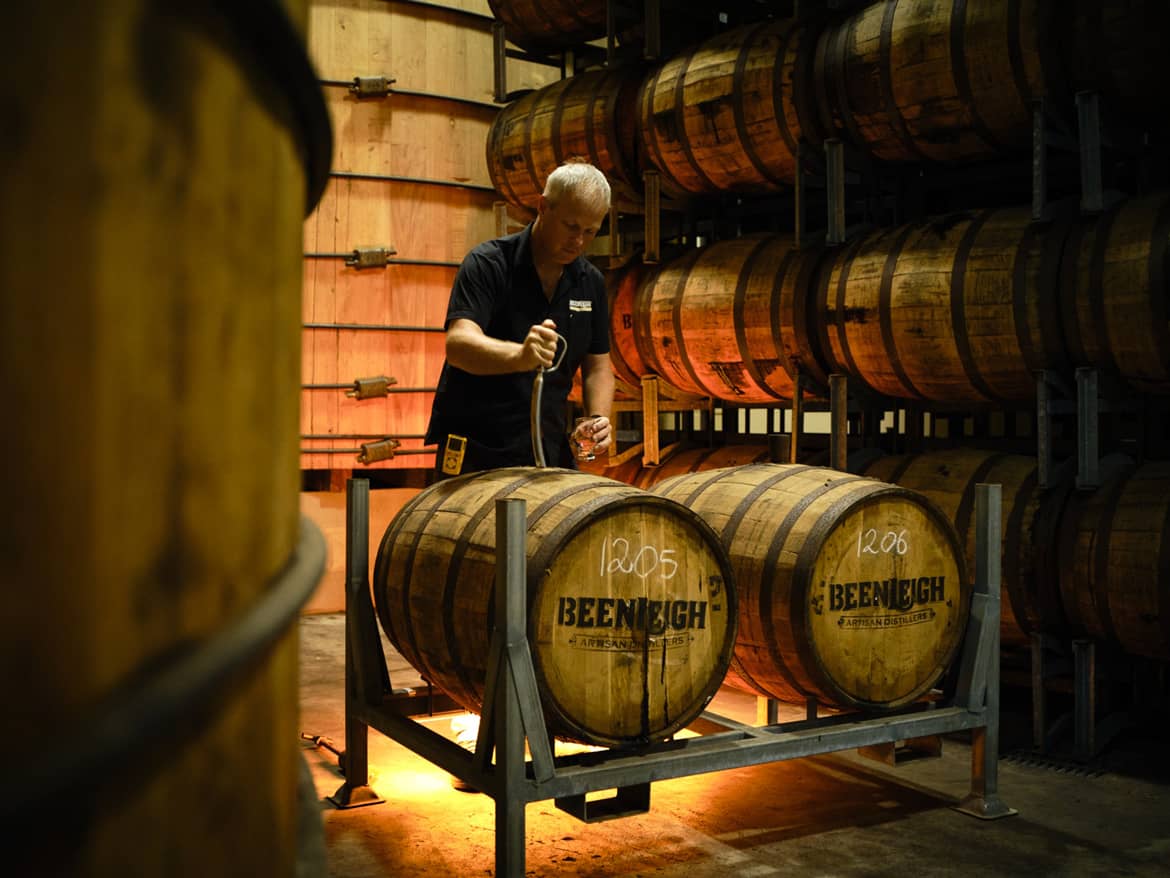 How was the exchange with Luca on a technical level? Did your interaction leave something to you in terms of new ideas, new projects etc.?
Ahh everytime we connect there is much discussion and enthusiasm to shine the spotlight on Beenleigh to the world. Forever the student, I am always learning and we have discussed several opportunities as it is always a fantastic experince to connect with Luca & the LM&V team.

Our unique and iconic ‘Old Copper’ stills are always a topic of much discussion and perhaps what/ how or when these could produce ‘Double Pot Still’ Beenleigh Rum after almost 50 years silent. Another topic is our ability to leverage the Dunder & S.Pombe production process to create a elevated ester profile, or long-term fermentations of 2, 3-months or longer similar to our recently awarded 2017 Flood Rum that was a result of 127 & 130-day fermentation. Perhaps best I not reveal all our secrets..

What are the differences in the production method between 2006 and 2015?
Yes - there are several distinct differences in the production method of these vintages that delivers Rum lovers an experince to help understand our Australian style and evolution over the past fifteen years. The distillation process at Beenleigh has varied across our more than century of production within our heritage-listed 1890s era bonded warehouse and Distillery.

So, perhaps a little background journey for readers. We are a 100% cane molasses operation and from the 1890’s through mid-1970s – this was the Double Pot-Still era utlising our ‘Old-Copper’ Single Retort Vat Stills including Rectifier, Shell & Tube and Worm coil Tubs that were built locally in the 1860s. The Boiler section of the Pot Stills were originally wooden staves with hoops which appear to be replaced to 100% Copper around the 1940s. The copper Rectifier sections of our Wash & Spirits Double-Pot Still pair are very similar to the infamous Port Mourant Demerara Rum Pot Still. In the late 1970’s these Pot stills were decomissioned and replaced with Distiilation Columns yielding a very different Rum flavour profile & output efficiency. 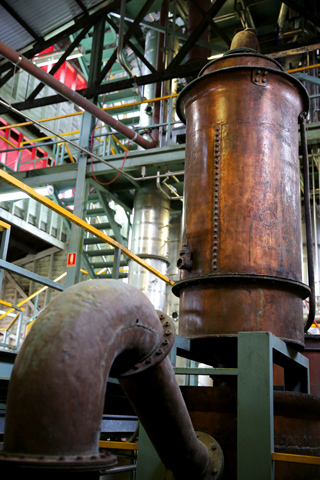 Beenleigh Rum was 100% Column Still distillation through to 2004 when further upgrades resulted in a change to American Whiskey/ Bourbon style Beer Column and Doubler or Pot distillation process (~15,000L capacity) that is a balance of both volume efficiency and flavour profile.

The Column & Pot process for Australian Rum distillation is rather synonymous with our other two industry pillars with both Bundaberg & CSR Pyrmont facilities operating this way and providing the inspiration for conversion of Beenleigh to follow into our modern era since 2004 to current. Integral to this process at Beenleigh from 2005 to 2010 was also the focus on S.Pombe yeast with our own yeast propagation facility, dunder cycling and 12-14 day fermentation length underpinning a bold, rich and iconic aroma & palate profile we savour across the 2006 co-bottling release.

Across to the 2015 release, since 2010 to current Beenleigh switched to 100% cerivisae yeast focus & therefore the fermentation and distillation efficiency is a contrast, as is the flavour to previous S. Pombe focus. Distillation process of Column & Pot remains constant between the two, yet the the fermentation process is a key difference in production process and as a result we effectively have two Beenleigh marques evolving from fermentation and yeast profiles. Rum maturation in Australia requires a two-year age statement and the warehouse location, geography and maturation climate differences are highlighted further with these two co-bottling releases.

A core facet and constant amongst the diversity of these co-bottlings and all Beenleigh rum since 1980 is our Master Distiller/ Blender – Wayne Stewart who is responsible for all of our world-class quality liquid who in 2021 celebrates 41 years with the Distillery. An incredible achievement as an icon within the global rum industry to deliver these phenomenal Australian Rums to the world – a mentor and fountain of knowledge. 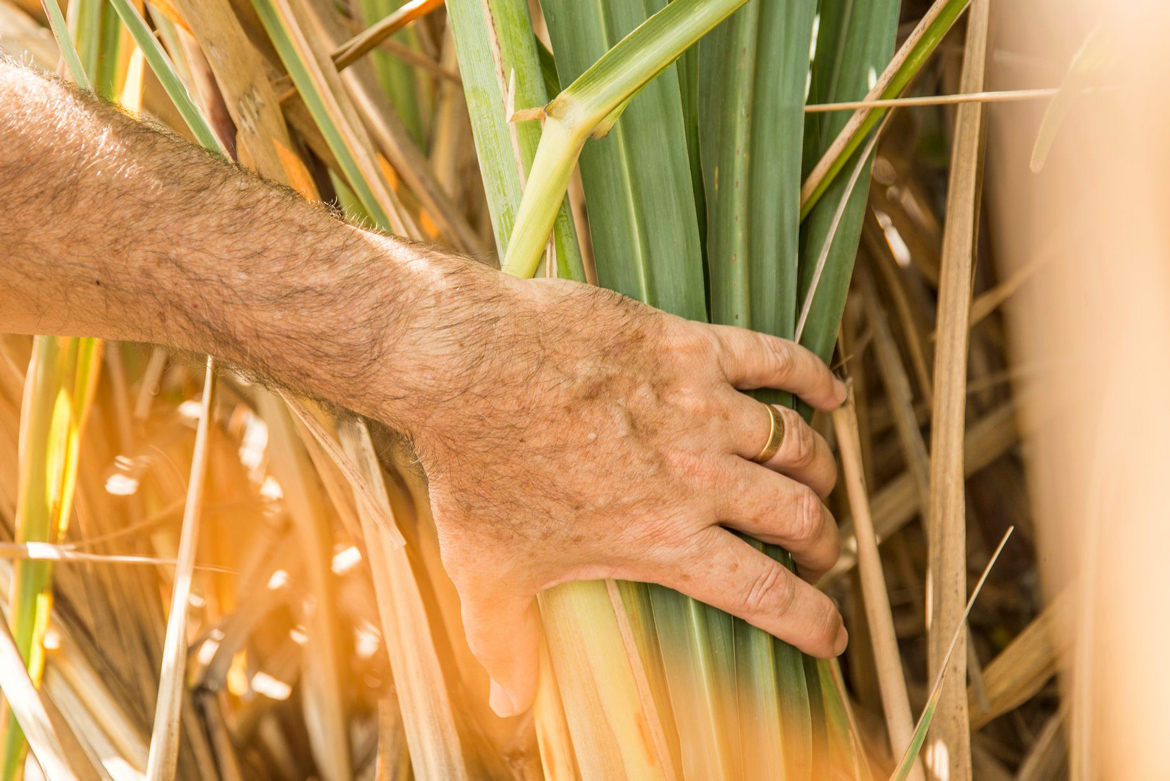 Is there a particular reason why the 2015 is an arid desert ageing?

Yes within our company we have a second maturation warehouse located at our Twenty Third Street Distillery that is ~1,800km distance between Beenleigh, Queensland and Renmark, South Australia. This site operates as one of the largest Brandy, Whisky, Gin & Vodka brands in Australia including three 7,500 litre Copper Pot stills utilising the neutral cane base spirit for both Gin & Vodka produced here at Beenleigh, aside from our Rum focus.

Back in 2015 during re-development of the Twenty Third Street site, our company had the vision to explore alternative maturation opportunities of relocating freshly distilled spirit from Beenleigh that is otherwise considered Tropical climate and innovate with our inland, arid – almost desert maturation climate. This location harnesses Australia’s raw natural beauty as the driest continent globally and the maturation showcases the nuances of low humidty and high heat influence that delivers with an intriguing aroma, palate and finish. A World Premiere for Luca and LM&V to share with Rum lovers! 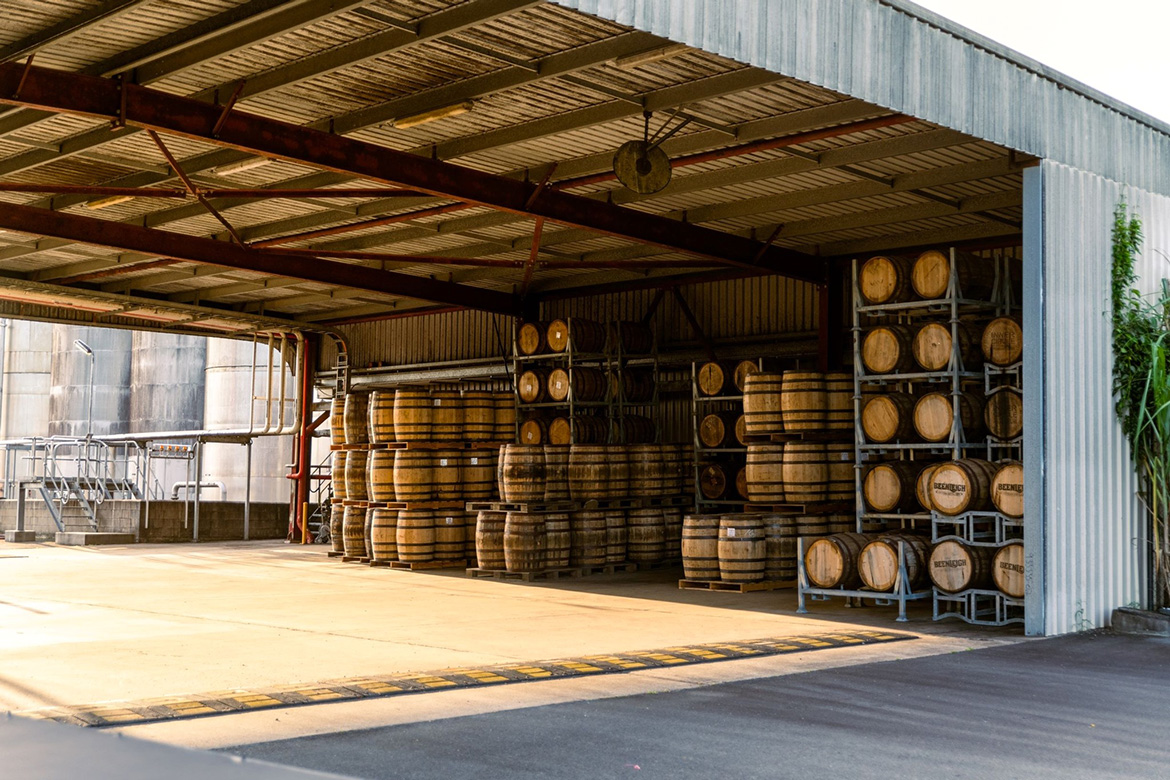 What are the differences, for what concerns Angel Share, between an arid desert ageing and a tropical ageing?

Our two maturation warehouses are in very different climates across a similar distance equal to London to Sicily or London to Seville/ Sweden OR Iceland which will provide readers perspective about potential variation of climate variation that may occur yet is different to Tropical or Continental maturation.

Australia is dry, hot and tends to have significant climate extremes from drought to floods to wildfires and it is this unique environment we are exploring how it influences our Award-Winning Rum. Maturation at Beenleigh includes a diverse range of historic large format vats that date back to 1890s and 1920s and 1000+ ex-Bourbon American Oak barrels, our vintage stock volumes are insignificant and preciously rare compared to many of our Caribbean colleagues and Fiji. The humidity within our Beenleigh warehouse averages 55-66% with temperature ranging from 0.0c to 40c+. At Beenleigh we focus on traditional high alcohol strength maturation which is typically ~78% ABV and average ~6% angels share per year from our Bourbon barrels and average ~3% from our Vats.

Our Desert/ Arid maturation environment is quite different average temperatures from 10c to 25c with extremes of -6.1c to a sweltering 48.6c Summer heat. This warehouse location receives only an average of 20mm of rainfall per month, compared to 4 times at Beenleigh at ~80mm of rainfall per month. Humidity in this warehouse averages 35-40% and we have maintained the ~78% ABV maturation, however due to the Summer heat and low humidity, the ABV escalates – increasing during maturation. In this Riverland region of Australia adjacent to the famous Murray River, at our Twenty Third Street Distillery location we have Brandy, Port, Single Malt Whisky and Rum all maturing.

We hope that consumers appreciate and enjoy the two 2006 & 2015 vintage co-bottlings, share them with family, friends, and Rum lovers everywhere and we very much look forward to your feedback. 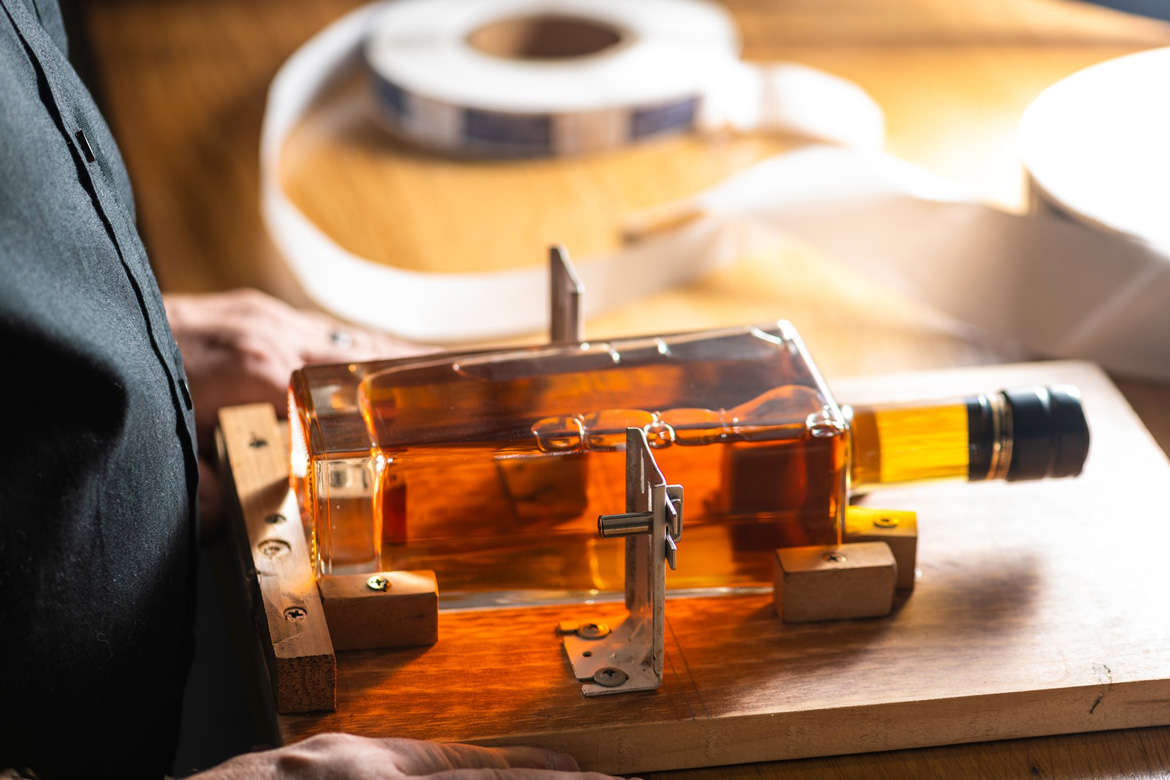