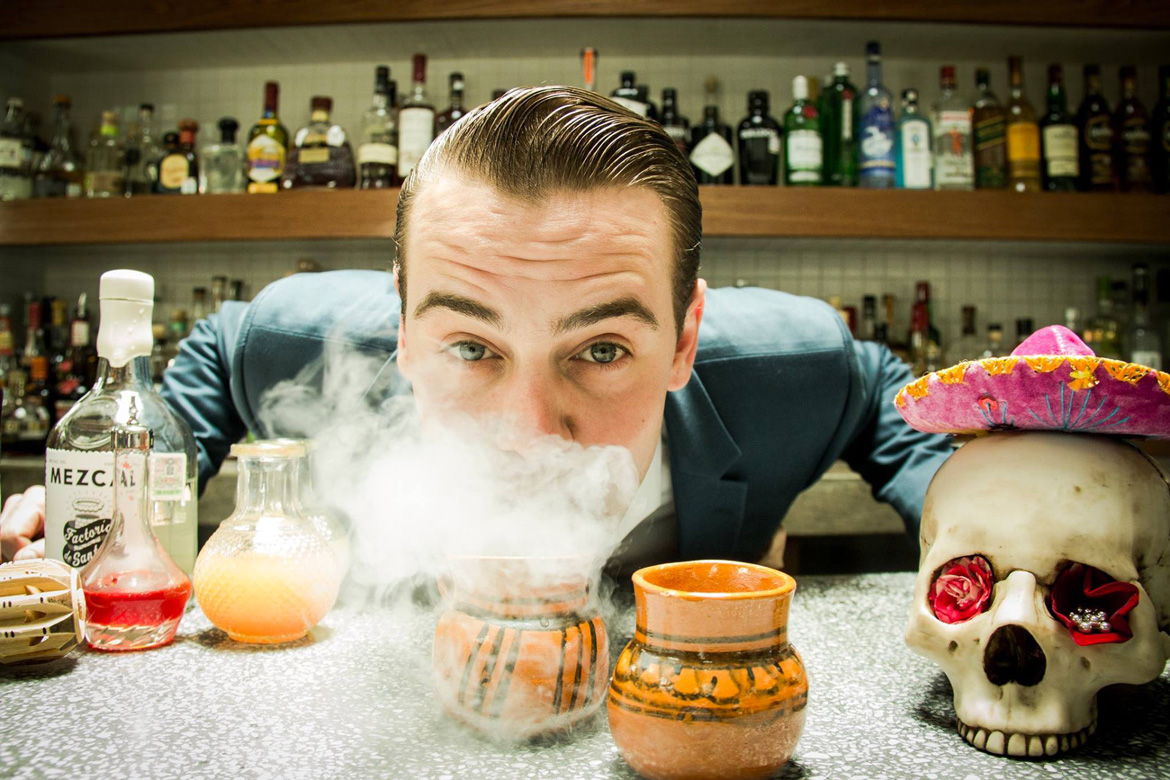 Dom Costa - So Simone, first off I’d like to introduce you by talking about the first time you came to Milan as a guest speaker to one of my events. I remember you had a plane to catch and were constantly looking at your watch. That was a few years ago...
Simone Caporale – Yes, quite a few years ago, Dom. It was the first time I left London for business, and later that night you took me barhopping around Milan. I was already working at the Artesian and was worried about getting back on time the next day. My flight was at five in the morning. I remember kneeling on the floor in a bar and you standing over me holding a bottle of tequila, pouring straight into my mouth. I kept telling you, "Dom, you know I have a plane to catch at five, right?" and at some point you said, “Simone, you've already missed your flight.” And I did miss it. But I would do it all over again.

D.C. - Let's take a step back to the beginning of your career. I know you’ve worked in Como before moving to London...
S.C. - I worked in two places in Italy. One is the Touring Café in piazza Cavour, Como, and before that I worked at the Lenno Beach Resort on Lake Como. It was the early 2000s, years of great excitement.

D.C. - Did anyone influence your decision to move to London or was it your own idea?
S.C. - Several people influenced me. Before moving to London I worked in Valencia, Spain, where I met some guys who had previously been to London. They kept telling me, “Look, Simone, if this is really your passion, you need to go to London.” I remember one night a friend of theirs came to my bar, a famous bartender by the name of Ugo Bellan who was already working in Ibiza at the time, and he too kept telling me, “Go to London, go to London.” In the end they convinced me, and off to London I went. 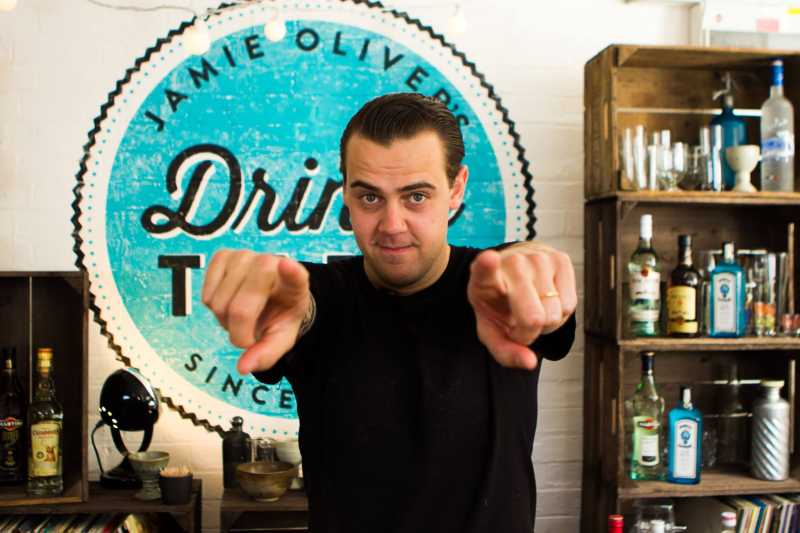 D.C. - Once in London, where did you find work?
S.C. - At first, at a bar that had a "buy one get one for free" promotion on cocktails at happy hour. There were 3 bartenders, 2 mixing stations and 4 metal pourers in the whole bar. It was just crazy, I used to get there early and prepare everything I needed in advance or I would never have enough time later. At that time, I used to walk around the city carrying a little book with interviews to many bartenders - including you, of course – which I used to find and visit every bar in London. I would go in, have a drink and ask if they were hiring, and could I have the opportunity to work for them. Eventually Esther Medina hired me at the Roast, which is this very nice upper-story bar and restaurant. She was a charming person who gave me the opportunity to cut my teeth as a bartender. After about a year I went to work at the Artesian with Alex Kratena. 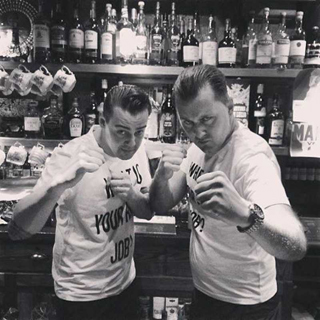 D.C. - You and Alex immediately hit it off, didn’t you?
S.C. - That's right, the first time I worked with him was at a show. I got there and found Alex quite, how shall I put it, tanked up, which is unusual for him as he normally handles alcohol pretty well. Only that time he says, “Look, I'm about to give a presentation, but the person who was supposed to be with me on stage is so drunk they’re in no condition right now. Can you do it?” Basically my job was hiding behind the bar and, from there, shoot soap bubbles in the air while he presented a cocktail. Alex was already pretty crazy at the time. So I said, fine, I'll do it. But just moments before going on stage, Alex takes out a bottle of Demerara rum and makes me drink. So of course the moment I leap on stage, I stumble and smash my head through a panel nearby. And that's how I started working “behind the bar” with Alex.

D.C. - Then it looks like after a while you and Alex started getting noticed.
S.C. - Yes, but it sure didn't happen overnight. It took at least a year and a half of really hard work and exhausting hours, to the point that, when journalists finally started paying attention to us, in a way we hardly noticed. We were so caught up in our work that it happened by itself, without us trying to get noticed, worrying about publicity or anything else. Then in 2013 we ended up hiring a communication agency, and that was a nice showcase for us. It was probably the smartest investment I ever made. But let me tell you something: having an agency certainly helps, but you need to have interesting content to communicate. Just throwing a lot of money out there isn't enough. 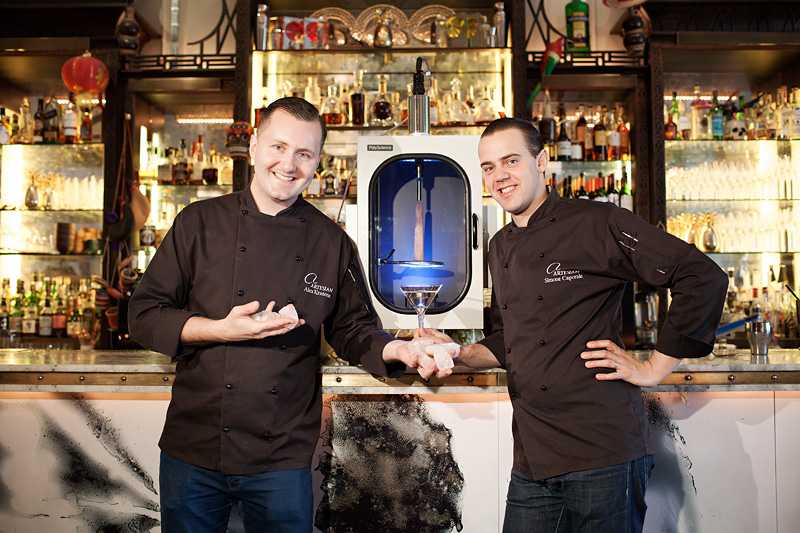 D.C. - What happened when you were asked to create a drink inspired from art? It wasn't an easy task.
S.C. - It wasn't. What's more, the agency asking me to make the drink was a major one, famous among other things for working with important art galleries. And of course, when they reached out to me, I immediately said yes, because bartenders are like concierges, they never turn down a request. But then after you've accepted you look around and say, "What do I do now?" So the first thing I did was something very basic. I took out my mobile phone and searched for “art” on Google! It's funny, but that's how I started out. I began browsing artworks online until I came across this painting by Piet Mondrian, famous for his compositions of intersecting straight lines creating squares and rectangles colored in yellow, red and blue. I thought, these three colors can be my ingredients, and for a bartender the white part definitely represents an empty glass. So I took a black marker and drew vertical and horizontal lines on a glass, then I took silicone ice molds and filled them with yellow, red and blue ingredients, froze them and arranged them in the glass so that the colors matched the black lines. I filled the glass with a transparent cocktail representing Piet Mondrian's white. My cocktail got chosen for the event. Maybe that's when I realized that outside the bartending world, the perceived value of our work was much higher than I would have thought. 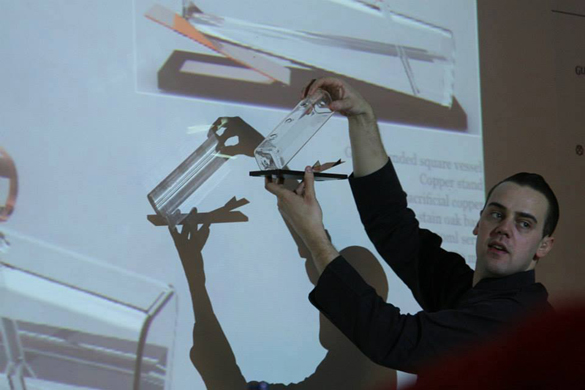 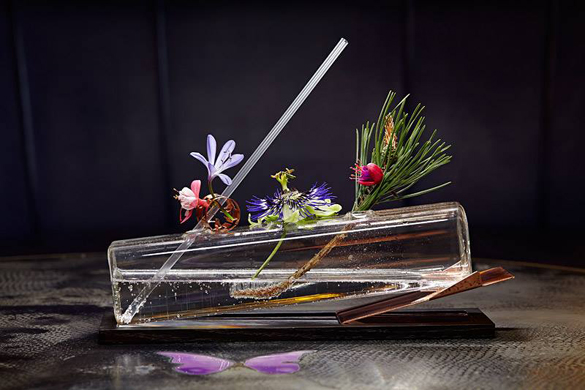 D.C. - How important is it for you to use organic, sustainable or environment-friendly ingredients?
S.C. - To me, it's important for ingredients to be consistent. Let me give you an example. Until a few years ago, people would look at you like a criminal if you used plastic straws. But then - maybe even out of understandable necessity - the same people who criminalized straws started selling cocktails in plastic bags, vac-packs and so on. So in short, I always say what really matters is being consistent. You know what I mean?

D.C. - Perfectly. When you left London, why did you decide to go to Barcelona instead of, for example, going back to Italy?
S.C. - It's very simple. Regulations and bureaucracy are much more flexible here in Barcelona. Also, the city is neither a huge metropolis nor a small village, and despite being quite cosmopolitan costs are definitely lower than in a city like London. Plus, I had a partner from Barcelona, which was crucial in my decision. Conditions in Italy make starting a business much riskier. So in the end Barcelona was the best choice. 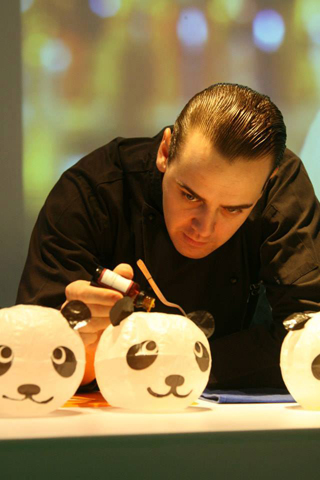 D.C. - Have you ever discovered an ingredient that you never thought existed?
S.C. - Cocoa mucilage, which I discovered in the Amazon. It’s a very delicate product found inside cocoa beans and ferments after just a few hours. It’s a ready-made cocktail, if you will, a cocktail made by mother nature.

D.C. - What about unusual flavor combinations?
S.C. - For example, kiwi and Armagnac - two ingredients that hardly anyone ever considers for cocktails anymore, but it’s a very elegant combination. We don't clarify kiwi, we just freeze it and let gravity precipitate the water contained in the fruit so the fiber remains suspended. Then we mix kiwi water with white Armagnac. That's all. It's just two ingredients, Dom, and pretty simple ones at that, but that cocktail is paying our rent.

D.C. - Tell me about the strangest request you got.
S.C. - Bruce Willis, the celebrity actor. He was shooting a movie in London and one night he comes to my bar. He asks me for a very fine old cognac and leaves with the glass. After a few minutes he comes back, tells me the cognac is a bit strong and asks me to mix it with 7up. What can I say, Dom? Aside from the cognac, I was used to seeing Bruce Willis as a real tough guy jumping off high-rise buildings, and I found it quite funny that he couldn't handle a strong spirit. 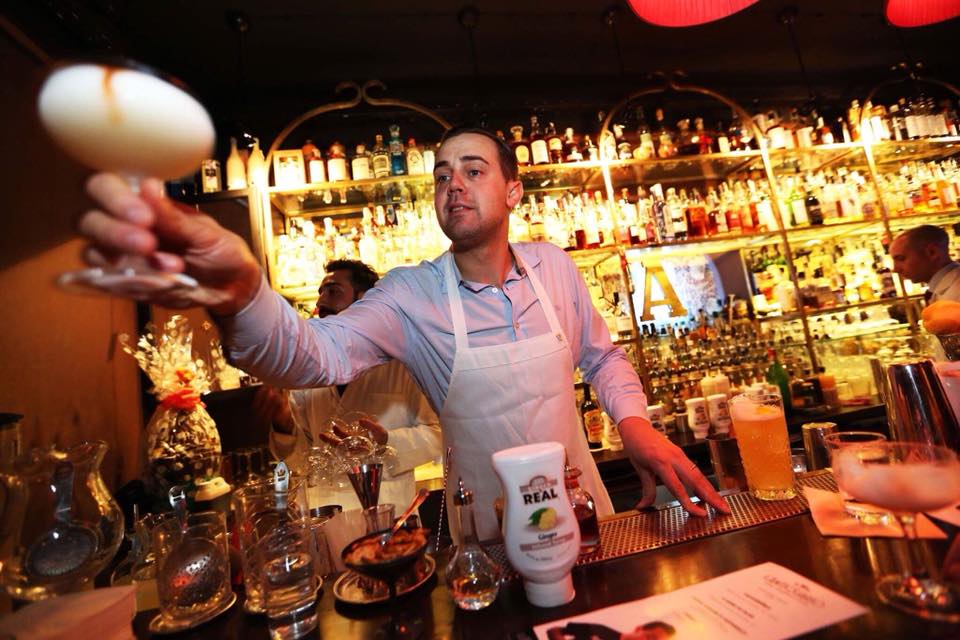 D.C. - Well, our interview is almost over, it's time for you to tell us what this Amaro Santoni is.
S.C. - Santoni is the name of a family. Stefano is the owner nowadays. The Santoni family have been masters in processing rhubarb for almost seventy years. I met Stefano Santoni several years ago and confessed my obsession with rhubarb. So some time ago he got me involved in the making of this amaro, a product proudly made in Italy, created in Florence like the Negroni and our very language. It has been on the market for less than a year and it's already doing very well, we are very happy with it. It's designed for trade professionals but it's perfect for home consumption as well.

D.C. -Thank you Simone, I just want to ask you one last question. I remember your identity card when you were a resident of London. To really understand who you are, I think you should tell us what it said under "profession".
S.C. - Ah, that's something that just came to me on the spot. When asked what I did for a living, I replied, I'm a punk rocker. And that's what they wrote on my identity card. I still have it right here.