Capovilla, the essence of fruit and the interpretation of flavour 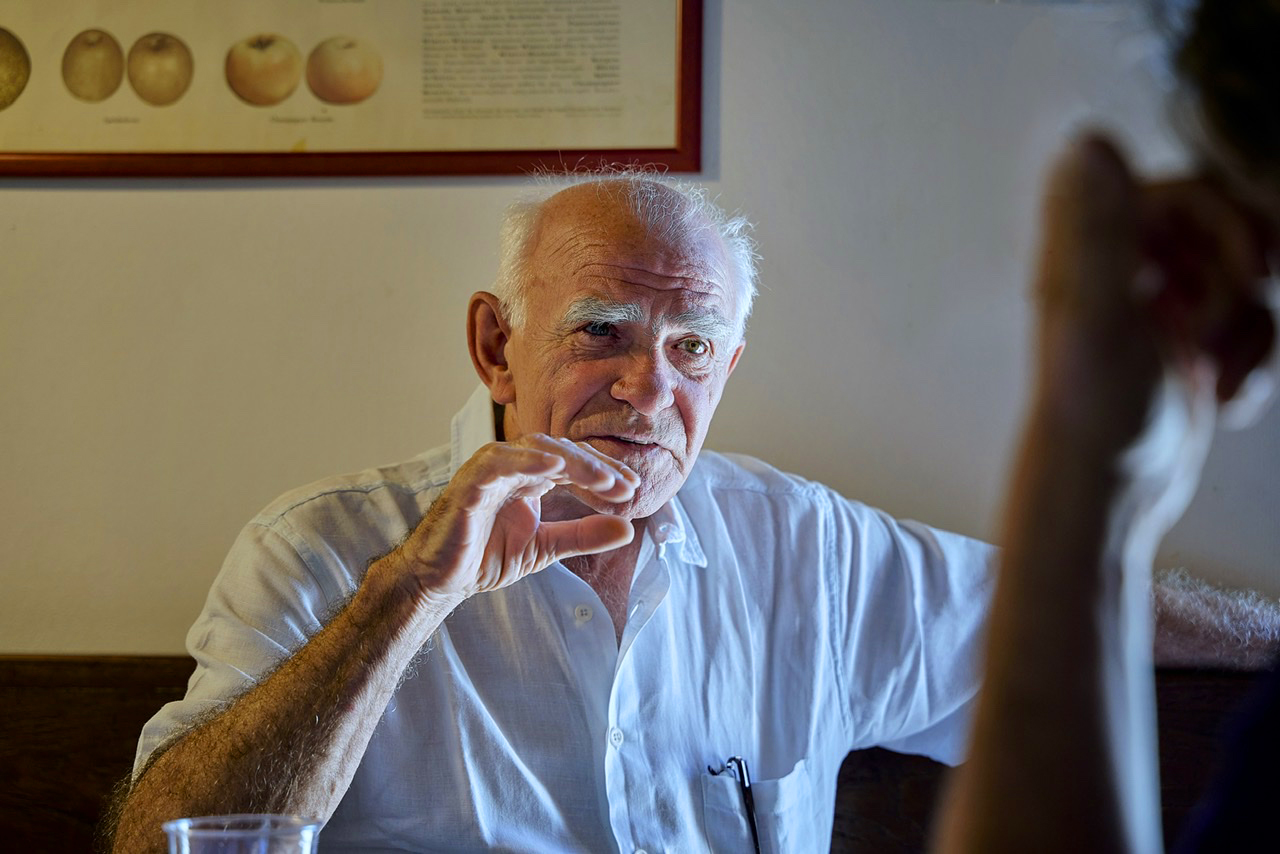 A day at the Rosà distillery, the birthplace of the legend of Gianni Vittorio Capovilla, the man who knows how to capture the essence of forgotten fruits. An ancient practice dating back to the Austro-Hungarian Empire, it all looks quite simple until you discover that simple is by no means easy. 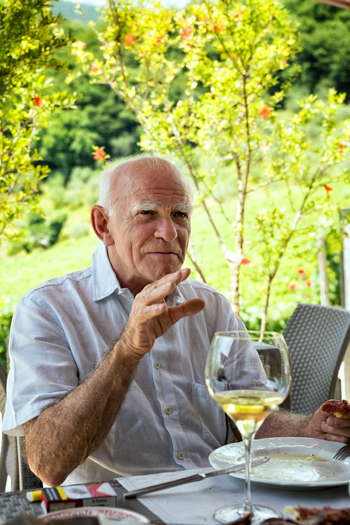 In order to understand what the 'interpretation of fruit' is, we should start from a confession made by Gianni Vittorio Capovilla, the greatest (and most award-winning) of our distillers: "When you try a new fruit you never know what the result will be, you won’t necessarily find the flavour you expected in your product. Some fruits are full of promise when fresh, but can change completely under the action of enzymes and fermentation, to the point that you can no longer recognize the original fruit."

And so, with a thousand questions on the 'interpretation of fruit' in mind, I prepare to spend a day at the idyllic distillery in Rosà, a stone's throw from Bassano del Grappa. It looks much more like a model farm than a distillation plant as we would expect it to be. And around the mulberry tree that, by tradition, is pruned every year by the great winemaker Josko Gravner, we discover just how difficult this painstakingly slow art is, in stark contrast with the here-and-now spirit of these times.

One might think that, after all, distilling fruits can’t be very hard: you blend them, let the purée ferment, throw it in a still and collect the result in a glass at the other end. Theoretically, that's just what happens. In practice, it takes a kind of sharp perceptiveness that translates into a thousand tiny details and that only a few manage to achieve: even "the Boss" needs to "try and try again." This is demonstrated by the several containers with labels that never make it on a bottle: "chestnuts 2002", for example, has been failing his rigorous tests, at least until 2021. 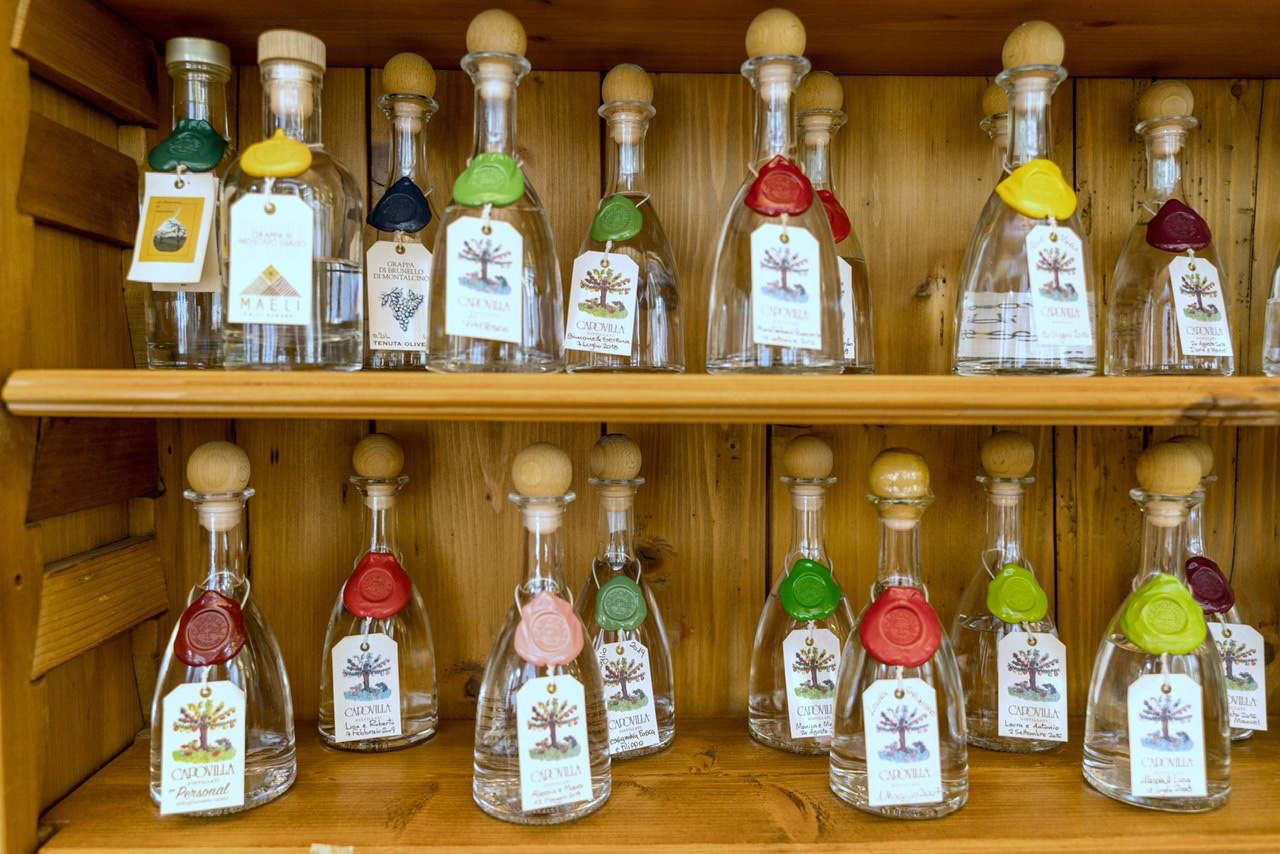 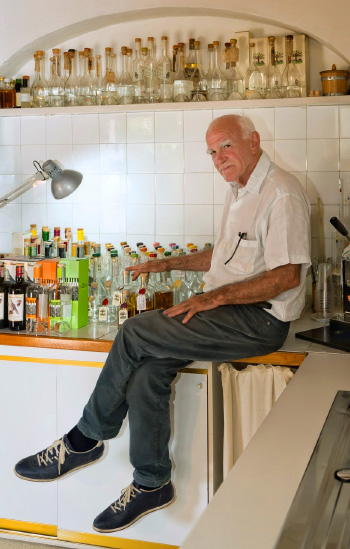 Sometimes Capovilla's work starts with him slamming on the brakes, throwing himself out of the car and diving into a bush. He’ll come out chewing a berry he caught a glimpse of with eyes sparkling beneath thick eyebrows: "It's one of my favourite parts of my work, where I can indulge my curiosity..." It sounds easy enough, but it isn’t. "The problem - he says - is getting your hands on at least 6-700 kg of fruit to start experimenting." Capovilla obsesses over ingredients. He inspects each fruit turning it over in his hand, whether it comes from his own orchards or was bought from trusty suppliers selected over the decades. Most importantly, each variety needs a deep understanding: “It's a bit like making wine. Of course, each fruit needs to ripen on the plant, but over time you realize that each one has its own perfect moment for processing. For example, not all fruits need to be at their ripest.”

Fermentation may look like the simplest part: “Sugar, we never added one gram. And we get all our yeasts with the fruit, from the skin. Then, of course, the environment has its own influence.” Fermentation is long, up to fifteen days. Even with sugar cane juice, Capovilla imposes his own timing – a far cry from the appallingly fast fermentation of other rums. When you drink his Rhum Rhum, which he distils far from Rosà, on Marie-Galante in the French Caribbean, the difference is obvious: an extremely clean-tasting rum, as quintessential as his fruit. Some people like their rum dirtier? "I understand them. But this is my way.”

Distillation takes place in five Müller batch stills - the celebrated Black Forest pot stills made, as the company website claims, with "blood, sweat and tears". Capovilla undoubtedly caused a few of those tears himself: “I disrupted the life of Müller's grandfather, I told him, 'I want more,' I want a device that can do what I need it to do. Not a train that runs on a track.” 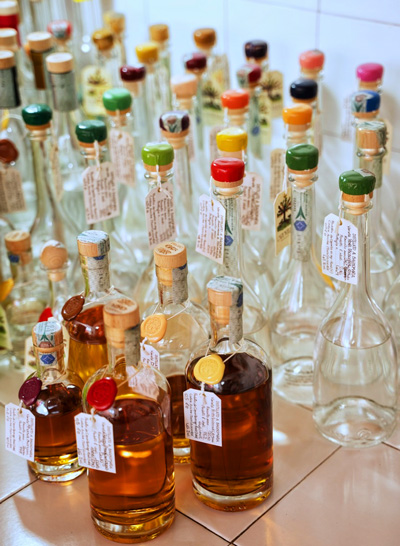 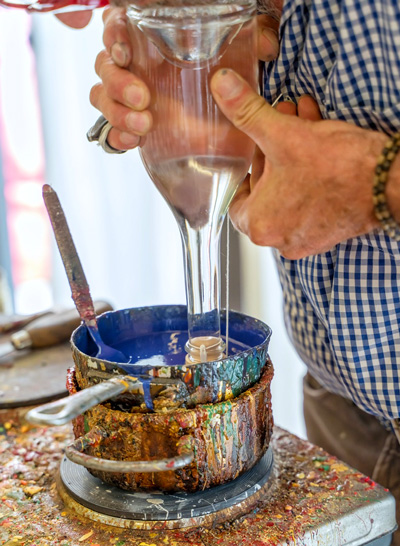 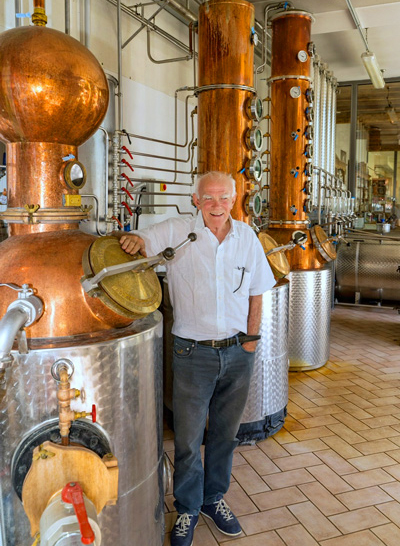 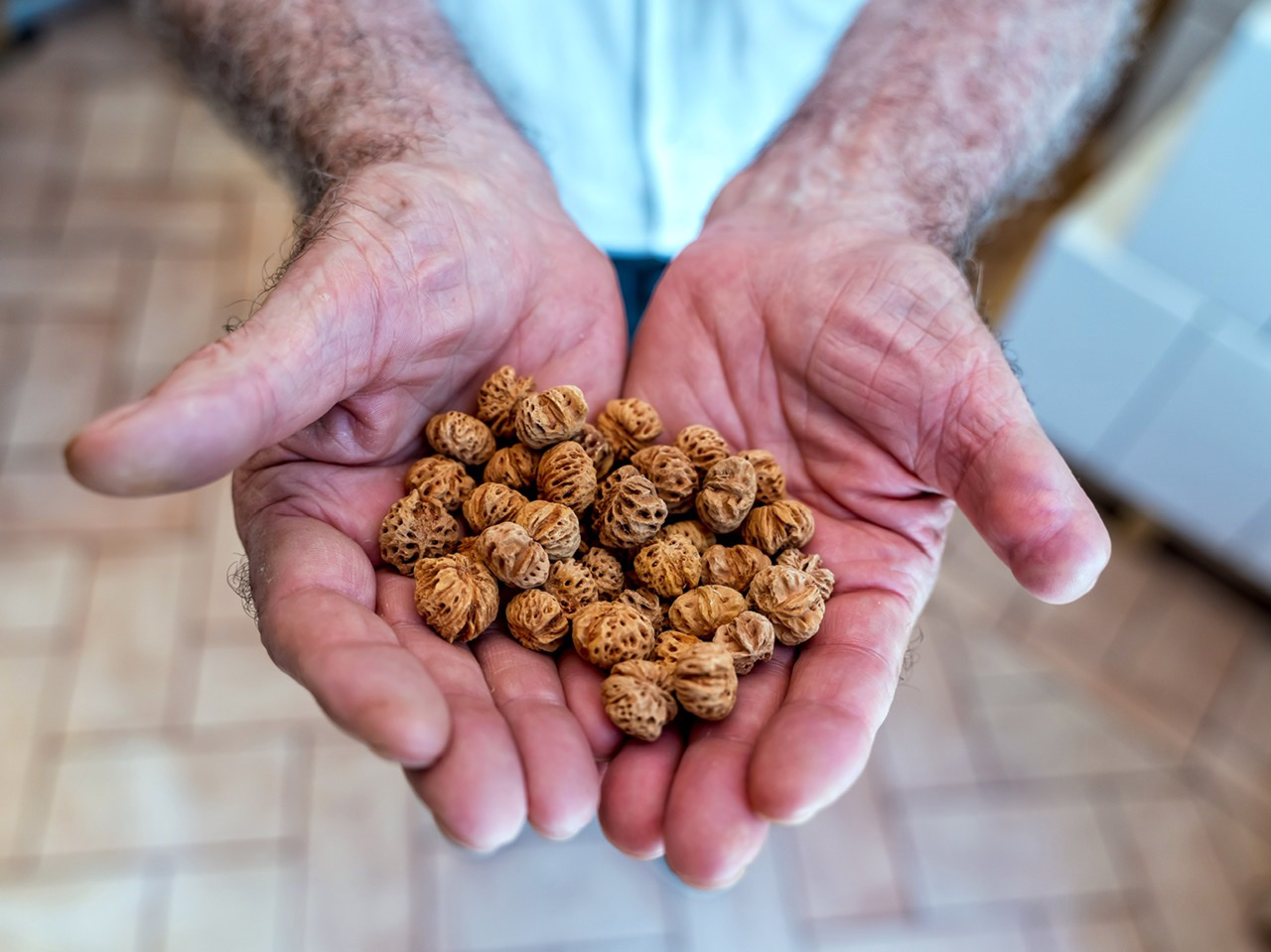 Distillation is always in a bain-marie and always double: “I think this is the best way to capture each varietal's nuances and separate them from the disturbing elements.” Varietal nuance is a key concept, as Capovilla does not distil mere apples or pears: his ever-changing product portfolio (he only distils when the fruit is up to his standards) today features apple varietals like Decio di Belfiore, Gravensteiner and quince; his pears are Buona Luisa, summer Moscatello, honey, wild as well as Williams. Plus countless berries - poor people's fruit, today very hard to come by - such as wild plums, rowan, currants, Cornelian cherries, blackthorn, thornless blackberries, wild raspberries, dog rose, sea buckthorn, sorbus Torminalis, prickly pears. 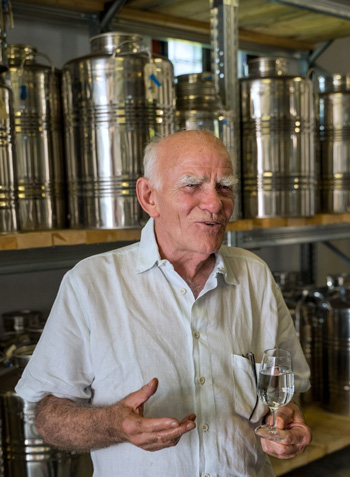 Many think that Gianni Capovilla distils fruit because he started out back in the seventies by selling wine making machines in Germany, the promised land for fruit spirits. But they are wrong. First, Capovilla actually distils everything from beer (Bierbrand) and wine to sugar cane and pomace - even tobacco. Secondly, as he explains, “in Veneto people used to distil contraband liquor using tools built with makeshift materials, according to the principle that nothing should possibly be discarded if it can be transformed into something that gives people comfort. A legacy of the Austro-Hungarian Empire."

Should the extremely hard to please Capovilla still find any unwelcome volatile substance in the distillate, an extra step is added to the process - a device he himself patented called Casco, Capovilla Spirits condensing system. The system heats up the distillate, which evaporates towards an ice-cold cone trapping the unwanted intruder.

Once removed from the still, the distillate is left to rest. And not for a couple of months' nap. We are talking years. Generally six, but easily twice as long, in steel vats. Wood would obviously release fragrances and colours that have very little to do with Capovilla's untainted fruit. Once distilled, “the product is genuine, even pleasant. But it lacks the expressiveness and full body that only comes by esterifying fatty acids.” And for that, time makes no concessions, although “some fruits lose their aromatic freshness over the years.” 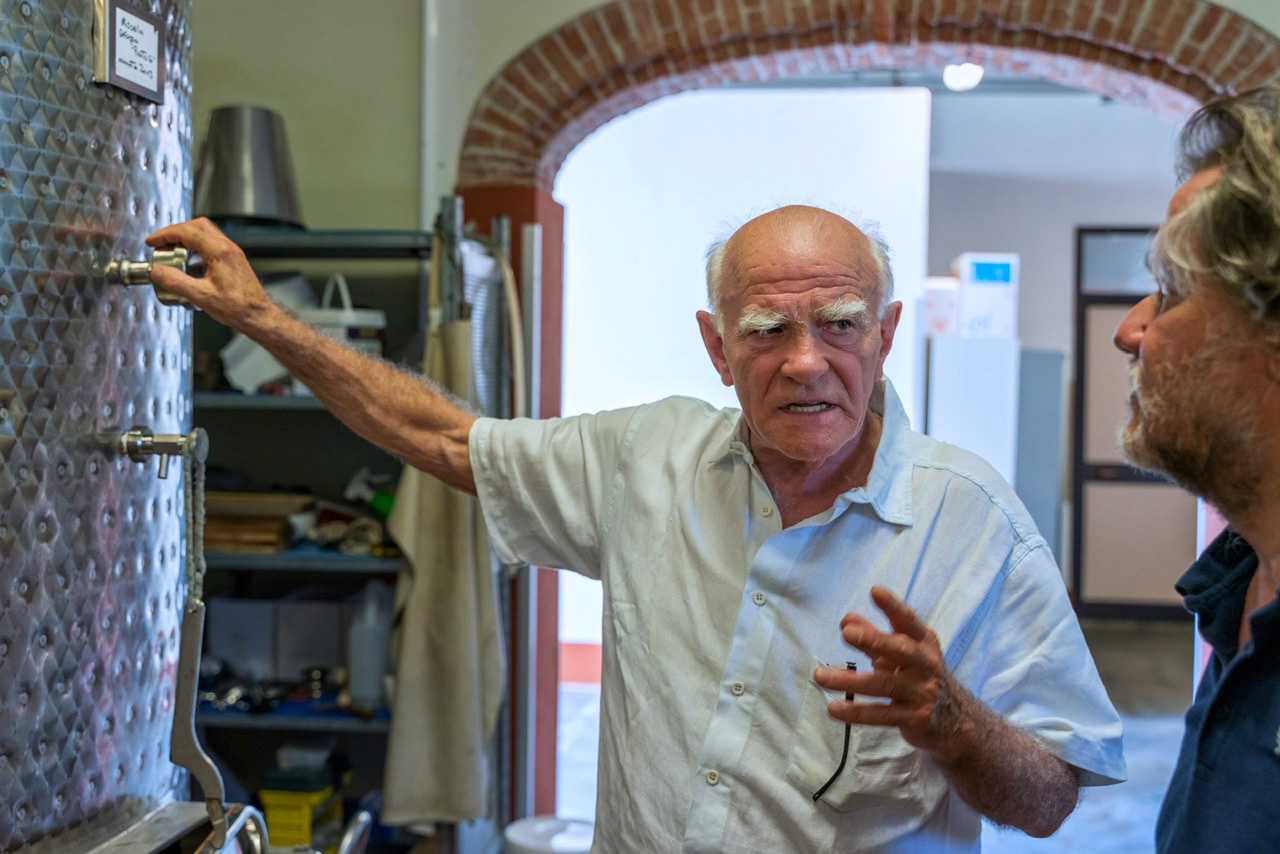 Done? Far from it. The distillate needs to be diluted. The water comes from two springs Gianni Vittorio Capovilla knows well, in the Belluno area. The distillate is thus brought down to the desired ABV but, again, it's not that simple: the necessary water is added little by little, a certain amount every day. When this is finally done, it's time for a painstaking bottling process. Each label is handmade and individually tied to the cork. One by one, the bottles are closed with a seal produced in-house with sealing wax and pigments. The bright colours sealing each bottle are the master distiller's favourite sight. His spirits are "the colour of taste," evocative of the original fruit. 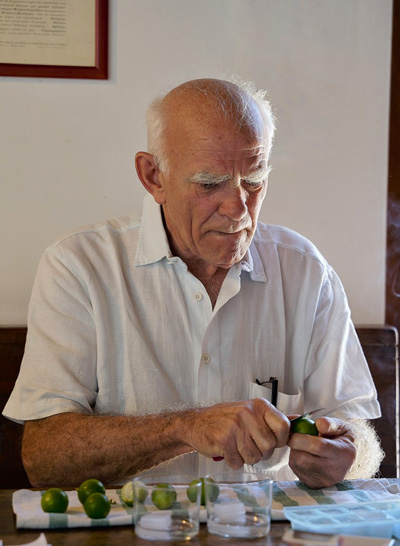 In sum, each fruit involves specific steps and a special processing method developed over decades. Capovilla actually learned the trade in Germany: “You visited winemakers, they explained their problems and you had to do your best to solve them.” That's why The Boss always demonstrates immense knowledge of wine as well. Then, "in 1976 I bought myself a 60-litre still at a fair and caught the fever."

However, quality comes at a cost. Capovilla seems to waft away a bad thought with a wave of his hand. “If I had to decide on a price before trying a fruit, it would all be unsaleable…” But the truth is that making one litre of quince spirit, for example, takes 60-70 kg of fruit. “That's right - laughs the Boss - if you want to get rich, this is not the job for you... In this business, your wealth is what you're good at doing."