Demerara Velier selections are among the most coveted rums by collectors around the world.

Demerara Distillers Limited is home to the oldest stills in the world, kept in perfect operating conditions. For over 300 years DDL has been selling rum in Europe by the barrel only, except for the El Dorado brand, which Velier has been importing since 1996.

But the fateful meeting between Velier and Demerara took place in 1999, when Luca, on a visit to Guyana, met DDL chairman Yesu Persaud, who will change his views of rum forever. With typical intuition, Luca suggested that Yesu start bottling different types of rum from different stills. Thus began the story of the first original, one-of-a-kind bottlings of different Demerara marks, fully aged in the Tropics.

The first three releases were bottled in November 2000 by Breitenstein Products, at the times the European headquarter of DDL, that became since 2003 Demerara Distillers Europe. This was the last occurrence when the samples were sent and not directly selected by Luca. He will then be selecting every Demerara bottling from the following series, bottled in 2002 with Port Mourant 1982, Diamond 1982 and Albion 1984, with exclusive access to warehouse n. 1 of the distillery in Guyana. Yesu used to prepare some samples that they would have tasted and selected together. Once selected, the samples were sent to Velier to be tasted another time by Luca. From 2005, with Skeldon 1973, the style of label and bottle changed, and remained unchanged until the last bottling in 2014 – with the exception of the last Demerara selection by Luca, launched for the 70th anniversary of Velier, the Port Mourant & Diamond 2001, bottled in 2017 with bottle from the series El Dorado Rare Collection. 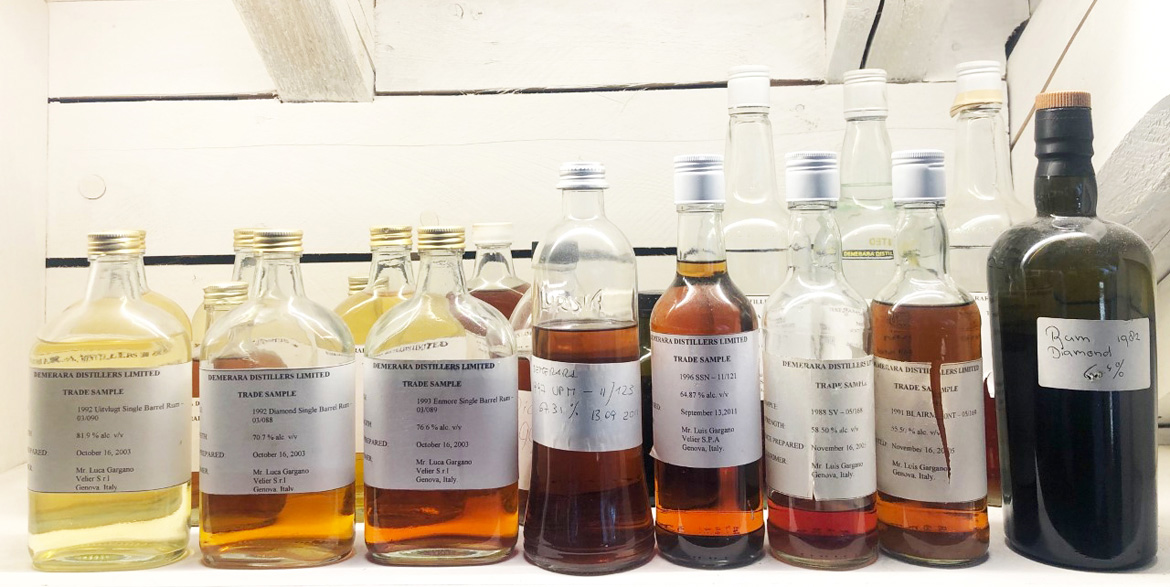 Between 1940 and 1955, the following distilleries were shut down, with their respective marks being produced by other distilleries.

In the mid-1950s, active distilleries included:

Between 1955 and 1965, the following distilleries were shut down, with their respective marks being produced by the Uitvlugt distillery with its adaptable Savalle column still.

In the ’60s, there were 5 active distilleries in Guyana: Albion, Versailles, Enmore, Uitvlugt and Diamond. The Albion distillery was shut down in January 1968 and its copper double pot still was transferred to the Uitvlugt distillery, which successfully reproduced the PM mark the same year.

In the ’70s, there were 4 active distilleries: Versailles, Enmore, Uitvlugt and Diamond. The Versailles distillery was shut down in November 1978 and its single pot still was transferred to the Enmore distillery.

Since 2000, the only active distillery is Diamond.