Alcohol from head to tail 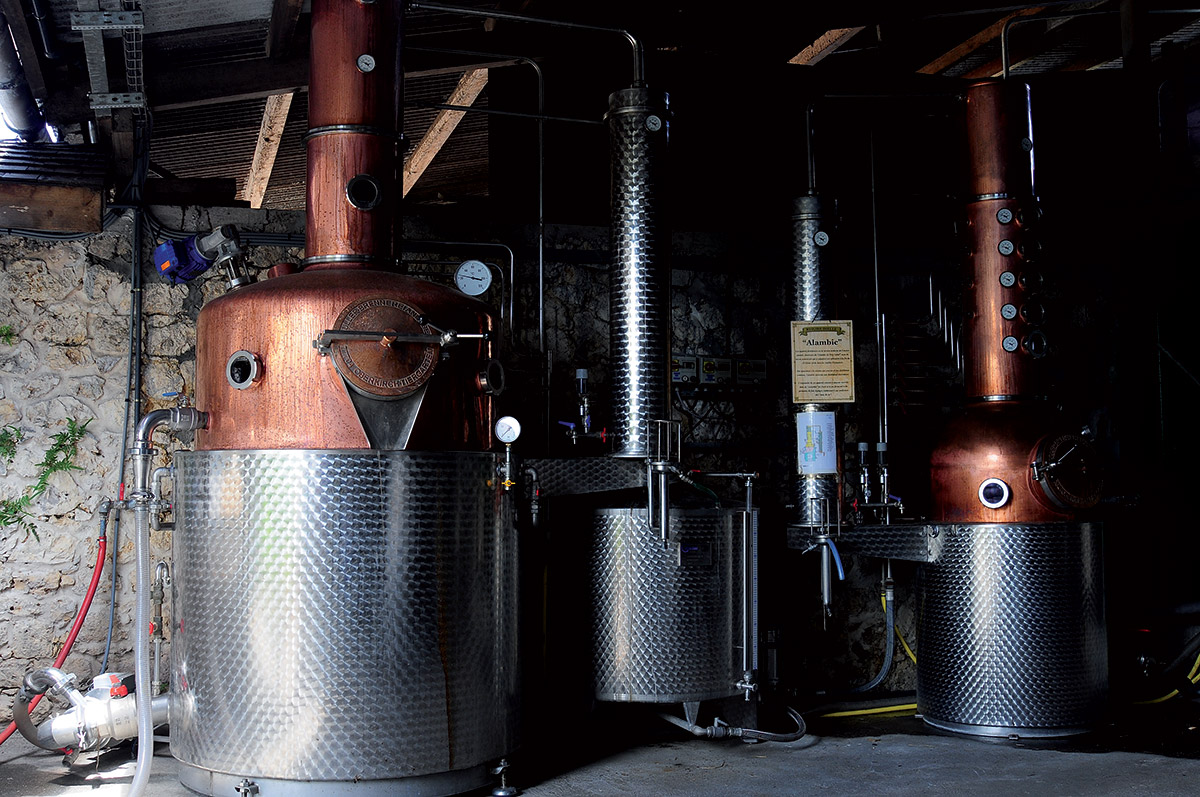 Our journey inside the still designed by Gianni Vittorio Capovilla and built by the German craftsman Muller.

A distillate or distilled liquor is made up of myriad substances, including esters and various types of alcohol with different boiling points. In the heads we find extremely volatile substances produced by alcoholic fermentation (and sometimes by the microbial fermentation that follows), for example acetone, acetic acid and sulphur dioxide deriving from yeasts. In the so-called heads, we also find most of the methanol, which is produced by pectin; as it has a boiling point of 64.5°, it can then be reduced by cutting. Despite this, methanol always bonds with molecules that concentrate, albeit minimally, during the entire distilling process, making their total elimination an illusion. The tails, on the other hand, are higher alcohols, and are fatty, oily substances such as glycerine.

Once fermentation is complete (that is, when all the sugars have been converted into alcohol by the yeasts), the compound will have a certain % volume of alcohol, which will be concentrated by distillation. In fact, during the process this alcohol is progressively extracted by boiling and concentrated until the fermented wash has been almost completely de-alcoholised. During distillation, the alcohol content of the resulting liquid undergoes variations which can be expressed by a curve. The first to evaporate are the heads, also called low boiling-point alcohols, which require a lower temperature to separate them from the watery part of the compound, as they contain more alcohol than the other components, and thus have higher alcohol content on exiting the still. After the heads have been cut, the master distiller will try to keep distillation steady (by adjusting the temperature of the system) to ensure a slow, gradual concentration of the alcoholic vapours until the alcohol content of the outgoing distillate decreases as the tail is reached, the last part of the distillate, or the high boiling point alcohols. Being comprised of less alcohol than the heads, they have a higher evaporation point (water has a significantly higher boiling point than ethyl alcohol) and so a lower alcohol content. The master distiller uses all his experience to taste and smell the spirit and decide where to cut the tails.

Having said this, we can begin our journey into the still designed by Gianni Vittorio Capovilla and built by the German craftsman, Muller, the pot still which is used to make Rhum Rhum and Habitation Velier Muller LL IV/3177 on Marie-Galante Island. 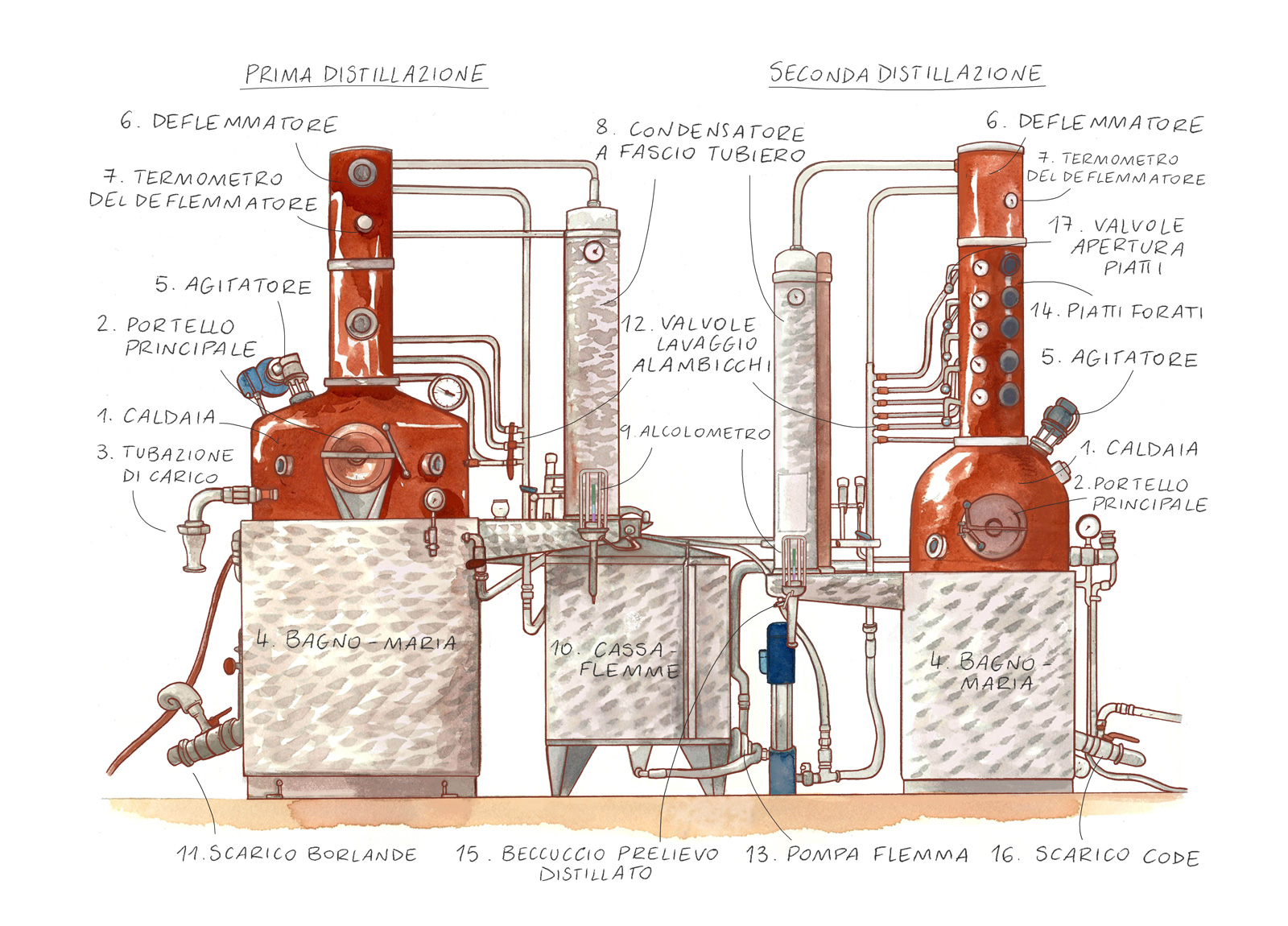 Distillation of RhumRhum in a Muller pot still begins with the introduction of the fermented wash into the boiler [1] through the main hatch [2] or the filling line [3]. The bain marie [4] is turned on (the boiler is surrounded by a jacket inside which water boils up to a maximum temperature of 100°-102°), after which the agitator [5], which serves to keep the wash moving to ensure even heat distribution, is also switched on. 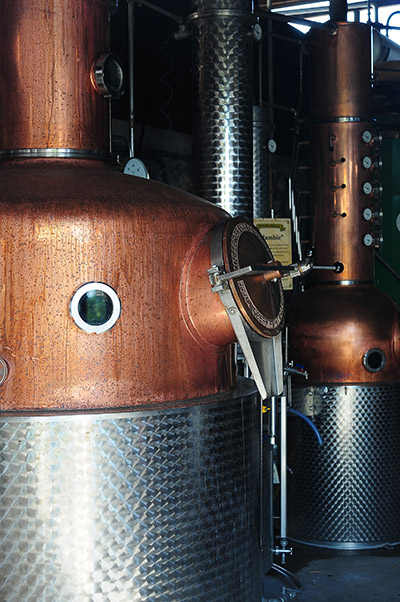 The wash is thus brought to boiling point and distillation begins. The vapours (a mixture of water and various alcohols) rise towards the dephlegmator [6], where they pass through small tubes in a water bath (the temperature of which can be adjusted in accordance with the master distiller’s requirements and monitored on the thermometer [7]) which has the purpose of concentrating the alcohol and curbing the heat. Water has a higher boiling point (100°) than ethyl alcohol (78.3°), so it condenses to a greater extent than the alcoholic portion of the compound, which passes more easily through the heating element, giving us a light alcoholic concentration of the phlegm.

After this step, the alcoholic vapours reach the shell and tube condenser [8], a column of long, thin tubes in a water bath through which the vapours are forced, passing from a gaseous to a liquid state. These pass through the condensed liquid drip pan [9] equipped with an alcohol meter (which indicates variations in the alcohol content of the distillate throughout the entire process), and subsequently accumulate in the low wine receiver [10], where the low proof spirit (about 35% vol.) of the first distillation is collected.

The stillage (also called vinasse) is discharged [11] and the still is washed out [12] ready for the next batch. The phlegm is then pumped [13] into the pot still for a second distillation.

The vapours pass from the boiler through plates which retain the liquid condensed in the upper plates and the dephlegmator above [14] and create thermal and physical resistance that helps to further separate the (lighter) alcohols from the (heavier) water as they rise up towards the dephlegmator. In this case, the plates do not act as rectifiers but rather concentrate and retain the heads from the first stage of the second distillation to prevent a reflux from them falling into the boiling chamber.

The vapours pass through the condenser, and as in the first distillation, pass through the alcohol meter to the distillate spillage pipe [15] which flows into a collection tank. Here the master distiller makes his cuts and divides the distillate into three parts, firstly eliminating the heads, collecting the heart, and finally eliminating the tails, [16] as they contain components which could give the spirit an unpleasant taste and smell. After this final step, the plates [17] are opened and washed with the rest of the still, ready for the next batch.