Calvados according to Drouin | Part 1 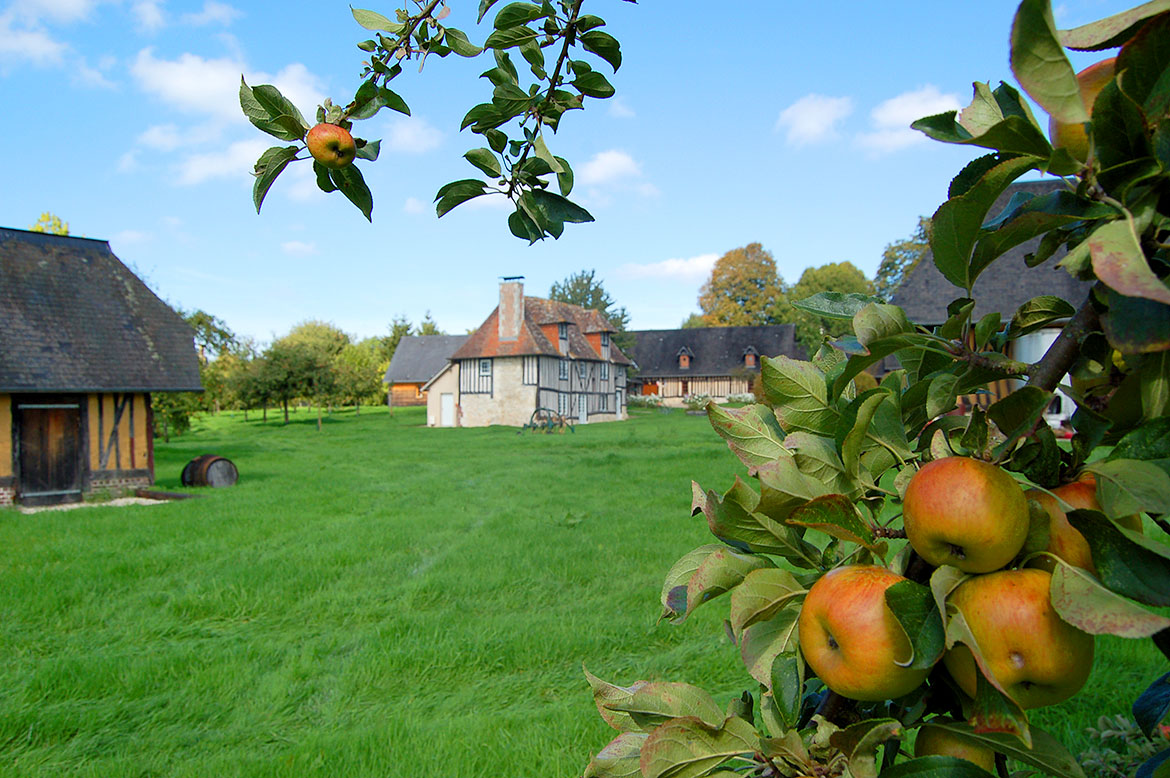 Traditional orchards to halt the progression of global warming

Apple and pear orchards in Normandy are well known as the cradle of exceptional ciders as well as for the most celebrated cider spirit, Calvados. Those who come to Normandy for the first time expect to find Norman cows grazing peacefully under apple and pear trees – a beautiful scenery widely celebrated by novelists, painters and magazine reports. How many times have I greeted visitors who, as they got off the train at Pont-L’Evêque station, told me how astonished they were at seeing no sign of the legendary Norman orchards through the window? The reason for this is that orchards have now been partly replaced by corn fields, and part of the traditional high-stem tree orchards have been replaced by low-stem varieties.

The significant decline of orchards due to the loss of a number of key markets doesn’t just damage the beauty of the landscape. Apple and pear tree orchards also contribute to preserving biodiversity as well as fighting global warming. 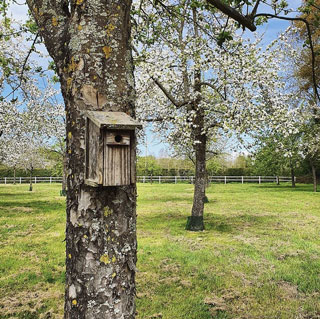 The issue of biodiversity has become a major concern today. As high-stem apple and pear trees are hardy and highly resistant to disease, chemical treatments are not needed and this helps protect biodiversity. Traditional orchards are also full-fledged ecosystems. The soil is alive with microorganisms and worms that turn everything they ingest into fertilizer of exceptional quality. Bees promote pollination, the ideal number being two beehives per hectare. Tits and sparrows protect fruits by keeping the insect population in check. Hedges provide birds with shelter and installing nesting boxes helps increase their number. Cows graze the grass and fertilize the soil.

As we recently found out while measuring Christian Drouin’s carbon footprint, each bottle of Calvados produced removes 2.9 kg of CO2 from the atmosphere! Given the magnitude of the climate change emergency, any effort to reduce carbon pollution should be applauded and promoted. Calvados might well be the world’s most sustainable spirit.

To assess the carbon footprint of his Calvados, Christian Drouin obviously considered gas consumption for distillation, electricity consumption, glass and cardboard packaging as well as transportation and shipping. Fruits are sourced within a range of just 15 km and bottles and cartons are produced within 200 km of the distillery. The still is equipped with a next-generation gas burner to limit consumption. A cider heater recovering part of the heat released by distillation also contributes to reducing emissions. With orchards planted exclusively with high-stem apple trees and surrounded by hedges, Calvados production absorbs nearly three times as much carbon as it produces. Preserving traditional know-how rooted in common sense and natural production methods makes it possible to produce one of the most virtuous spirits on the planet.

Our orchard is a case in point. One hectare of cider apple orchard absorbs 5.3 tons of CO2, nearly the same amount as one hectare of forest, while one hectare of cereal for making whisky absorbs 2 tons, one hectare of sugar cane 1.8 tons and one hectare of vineyard approximately one ton! And nothing prevents Calvados producers using fruit from high-stem trees from going even further to reduce their carbon footprint. To our knowledge, no other spirit can contribute to the fight against global warming as much as Calvados. The carbon balance is not just neutral, it is definitely positive.

There are many apple-based spirits around the world, but none are better known than Calvados produced in Normandy, a region in France which accounts for nearly 60% of the country’s total cider apple production. Over the last 50 years it has undergone considerable changes. 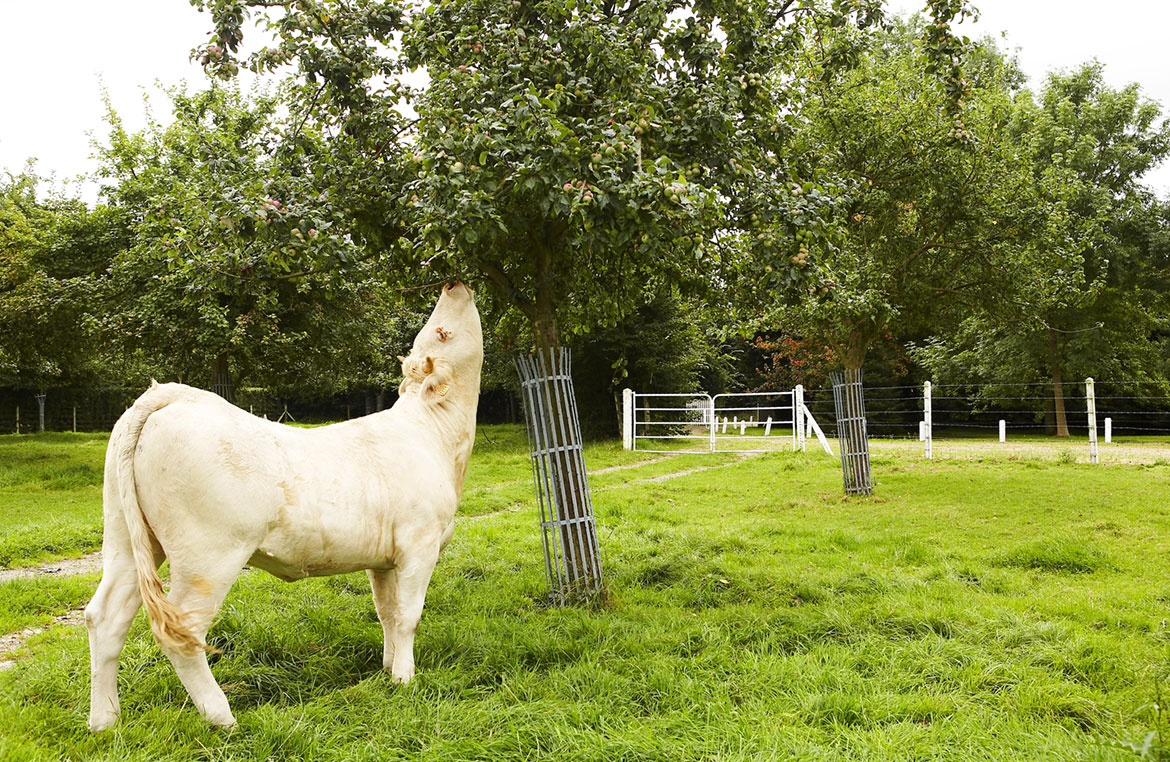 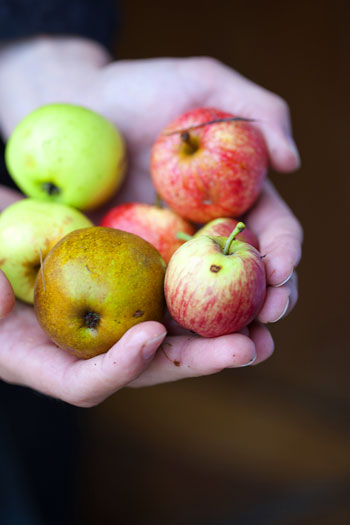 Calvados differs from other apple spirits as it’s produced by distilling fermented apple juice rather than fermented apples. It also differs from other cider-based spirits made from table apples. What makes Calvados unique is the use of specific apple and pear varieties, all specially grown for producing apple and pear cider. These are different from their table counterparts, which are not allowed as they’re rich in tannins (polyphenols).

There is a large number of these varieties, which are classified into several main categories: bitter, bittersweet, sweet, acidic, tart, sour, early, mid-season, late.

Calvados is also produced from Perry pears, which tend to be more acidic than apples. 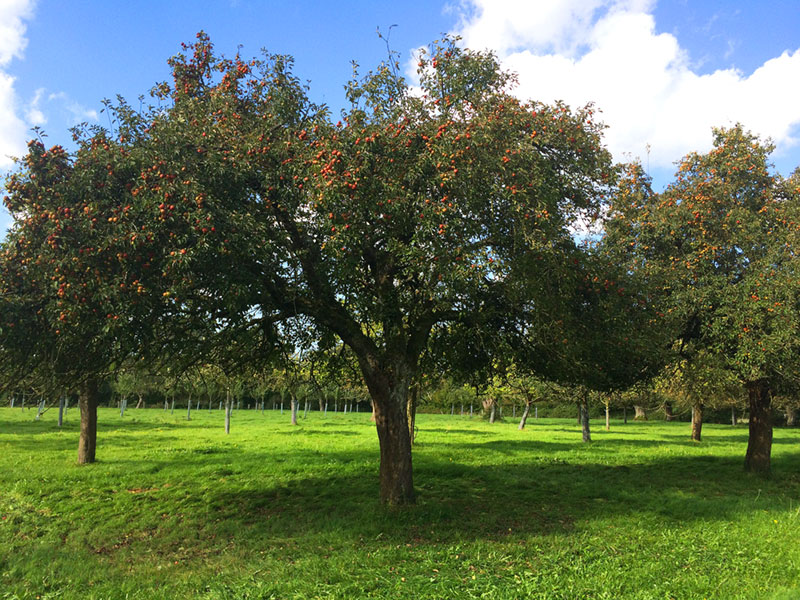 In the 19th century more than 2000 varieties of cider apples were identified. Studies carried out in the second half of the 19th century showed that orchards were plagued with a multitude of defective varieties that had to be eliminated. We can still find several hundred apple and pear varieties in Norman orchards, which extend over a total of 7500 ha. Production specifications list the apple varieties that can be used for each Controlled Appellation of Origin - Calvados, Calvados Pays d’Auge and Calvados Domfrontais. Producers of Calvados Pays d’Auge can choose from 103 apple and 30 pear varieties selected for their richness in polyphenols and other specific agronomic qualities. Between 15 and 40 different varieties can be found in most orchards. Orchards planted after 1997 must include a maximum of 10% acidic and a minimum of 70% polyphenol-rich bitter and bittersweet apple varieties.

Spring frost can have dramatic consequences on blooming and fruit formation. Yet, as each of these apple varieties blooms at different times over a period of six weeks, it is extremely rare for all of them to be affected by frost. Mixing early, mid-season and late varieties also helps better distribute work in the orchard. Depending on the apple variety, harvest takes place between late September and early December each year.

With few exceptions, like the English Somerset Cider Brandy or the Aguardientes di Sidra produced in Asturias, most of the world’s cider spirits are produced from table apples and have much less character and complexity than Calvados. 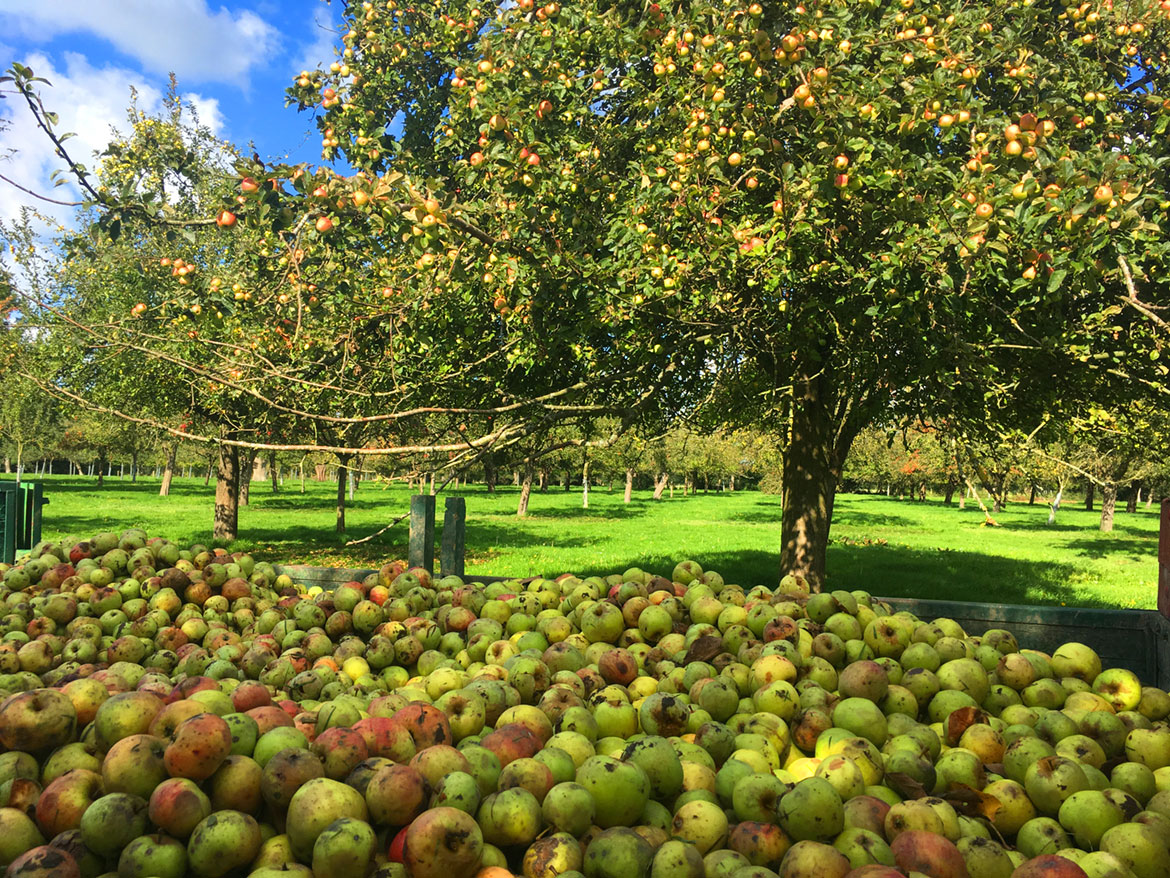 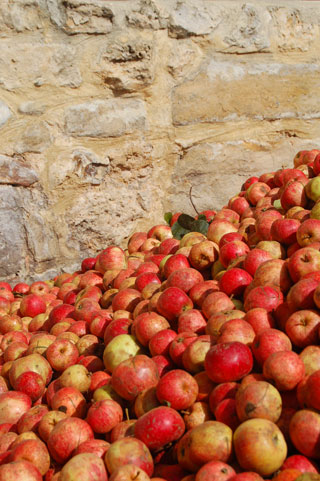 While high-stem orchards have declined significantly between 1980 and 2003 from 12 million to less than 4 million trees, their number now appears to have stabilized. Today they're mainly found in Pays d'Auge and in Norman groves. Low-stem orchards were first developed by innovators and made their appearance in the late 1970s, expanding from 900 hectares in 1985 to 4,700 hectares in 2001. Low-stem orchards account for just over half of total production as well as 80% of all apples sourced by processing companies.

While traditional orchards could be properly tended to at a time when labor was cheaper and the fruits were highly valued, that is no longer the case today. The idea behind the high-stem method is to exploit the soil to grow two crops: apples and grazing grass. However, high-stem trees limit grass production between 10% and 30%, depending on the age of the orchard.

Apple trees are grafted before planting. Grafting is done by joining a stem from a variety bearing the desired fruit to a rootstock selected for its strength and vigor. The optimal density is around 100 trees per hectare. Planting can be done both in late autumn in November and late winter, between February and March. The trees are planted in unplowed soil, in large holes with fertilizer placed under the roots to promote development.

During early development it is advisable to prune young trees with a technique that allows to select 'scaffold' branches in order to ensure healthy growth. For older orchards, one annual pruning is normally enough. To ensure healthy growth for the trees, nitrogen fertilization is recommended in the initial stages. Once the tree starts bearing fruit, less nitrogen and more phosphoric acid and potassium should be used. 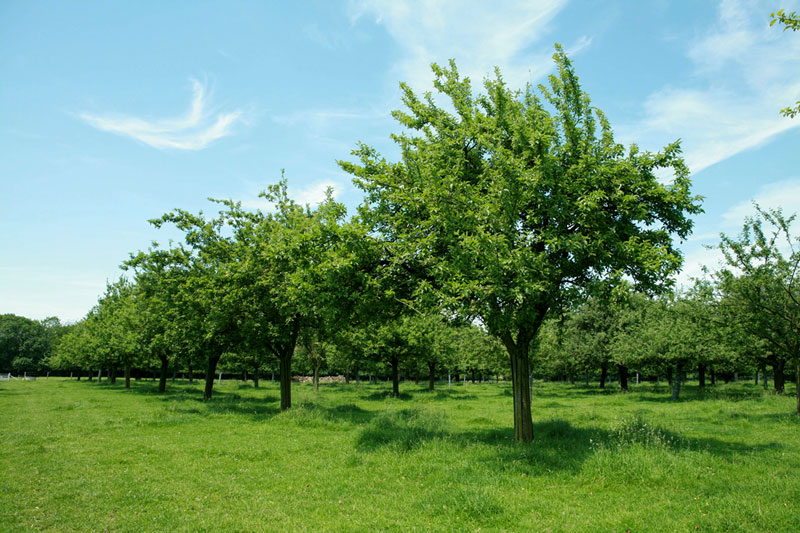 Low-stem orchards must be planted after subsoiling the dry soil, followed by plowing to bury down the fertilizer. Subsoiling breaks up the deeper soil layers and promotes rooting.

As for fertilization, the same chemicals are used as for the traditional orchard, but in larger amounts. More intensive farming will produce weaker trees. PPPs are used to keep pest attacks at bay. Once considered a necessity, chemical weeding along the tree rows is no longer done systematically.

The space between rows is sown with slow-growing grass varieties, and the grass is periodically shredded by mulchers. It is estimated that maintenance of an intensive plantation requires between 80 and 120 hours of work per year per hectare, compared to 10-12 hours per year per hectare required by high-stem orchards. Fruits are not picked from the tree but from the ground. Manual harvesting, which used to involve whole families for many weeks, has almost completely disappeared and is now mechanized. Likewise, today fruits are rarely left to rest in barns for a time to ensure perfect ripeness. A quality harvest requires multiple passages under the trees in order to only pick ripe fruits, which will then be processed very quickly. As this is an expensive practice, many farmers opt for once-over harvesting after shaking the trees, which results in apples being picked at different ripening stages. The absence of care in high-stem orchards will only reduce yields, while in intensive plantations it will quickly result in complete crop failure. 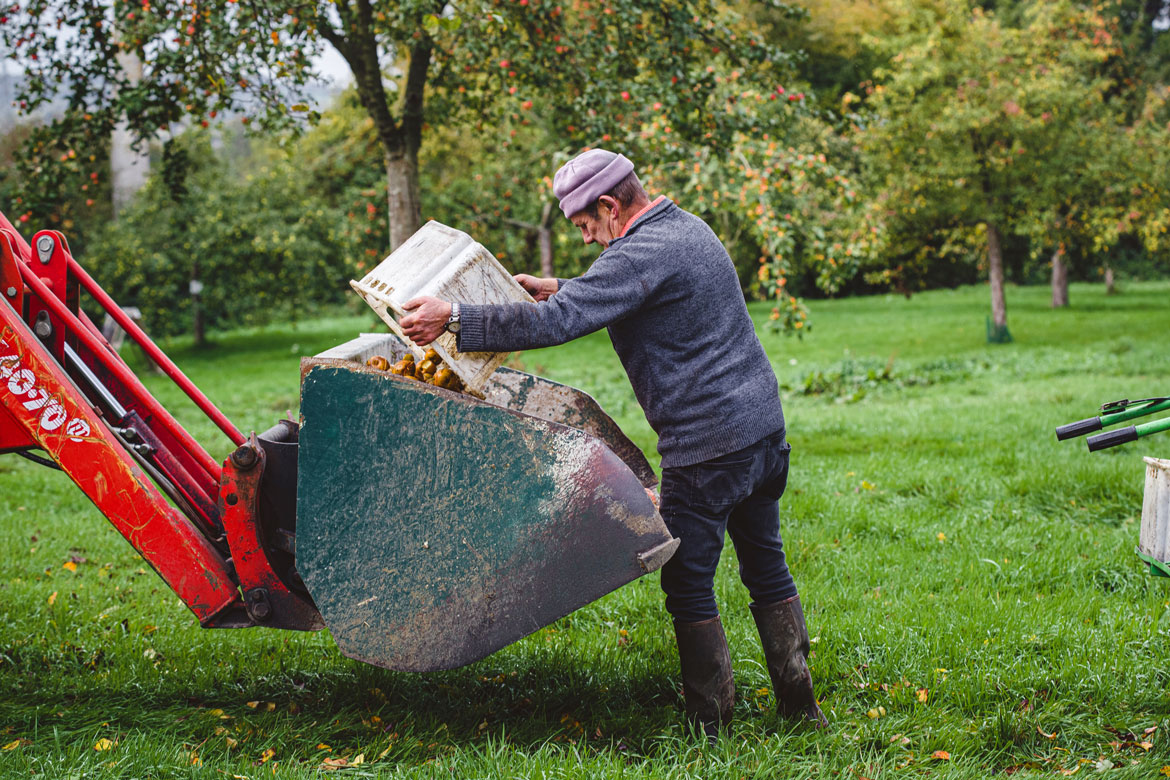 Normandy’s mild, damp climate has traditionally favored the growth of grassland as well as apple and pear trees. However, global warming can put a question mark on the future of this unique environment

The soil also plays an important role in the development of apple and pear trees by supporting the roots, retaining water, providing minerals and ensuring drainage. Soil varies widely across Normandy, resulting in a broad variety of types of Calvados being produced in different parts of the region.

Pays d’Auge rests on a limestone plateau, with clay being a very common element in the soil. The area features different types of soil - clay and flint, clay and illite, clay and limestone, silt. This creates ideal conditions for the shallow roots of apple trees.

The soil in the Domfrontais area consists of beds of granite, buried beneath layers of clay and shale. Here, pear trees grow better than apple trees, as their roots are better adapted at burrowing their way into this type of soil. 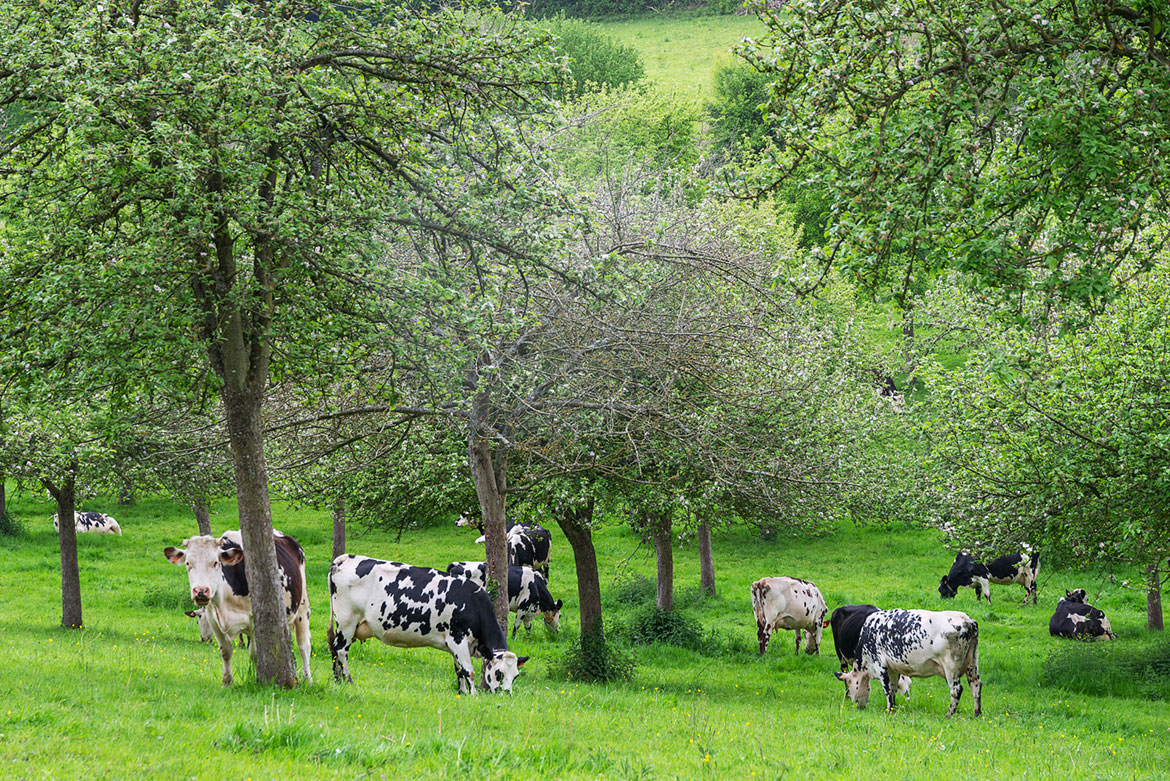